MilitaryCorruption.com reports, "COVER-UP?: What Actually Caused the Collision of the USS Fitzgerald and Deaths of Our Sailors?" 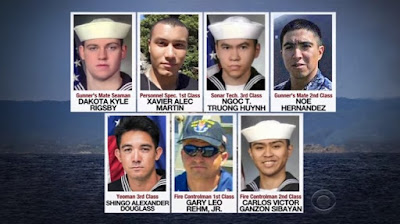 THE OTHER MCCAIN
Did a trivial dispute between women on the USS Fitzgerald end up causing the death of seven sailors and millions in damage to a naval vessel? One of the websites we love to read from time to time is:  TheOtherMcCain.com. They recently received this anonymous email about what may have really happened aboard the USS Fitzgerald…

During the early weeks after the USS Fitzgerald was speared by a lumbering Philippine container ship, it was noteworthy that the captain and a couple of admirals were publically named, but not the actual officer in charge, the officer of the deck. (OOD) The other person who should have kept the Fitz out of trouble is the person in charge of the combat information center, the Tactical Action Officer. That individual is supposed to be monitoring the combat radar, which can detect a swimmer at a distance of two miles. 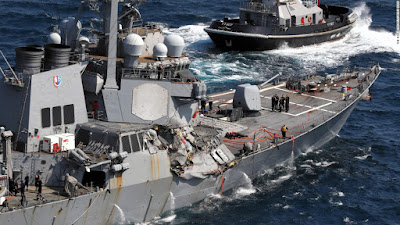 Not until a year later, when the final reports are made public and the guilty parties have been court-martialed, does the truth come out. The OOD was named Sarah, and the Tactical Action Officer was named Natalie, and they weren’t speaking to each other!!! The Tactical Action Officer would normally be in near constant communication with the OOD, but there is no record of any communication between them that entire shift!
Another fun fact: In the Navy that won WWII, the damage control officers were usually some of the biggest and strongest men aboard, able to close hatches, shore up damaged areas with timbers, etc. The Fitz’s damage control officer was also a woman, and she never left the bridge. She handled the aftermath of the accident remotely, without lifting a finger herself!
Look it up: The OOD was Sarah Coppock, Tactical Action Officer was Natalie Combs. . . . When I noticed last year that they were doing all they could to keep the OOD’s name out of the headlines, I speculated to my son that it was a she. Turns out all the key people (except one officer in the CIC) were female!
Indeed, I did some searching, and Lt. Coppock pleaded guilty to dereliction of duty. Lt. Combs faced a hearing last month:
In an 11-hour hearing, prosecutors painted a picture of Lt. Irian Woodley, the ship’s surface warfare coordinator, and Lt. Natalie Combs, the tactical action officer, as failing at their jobs, not using the tools at their disposal properly and not communicating adequately. They became complacent with faulty equipment and did not seek to get it fixed, and they failed to communicate with the bridge, the prosecution argued. Had they done those things, the government contended, they would have been able to avert the collision.
That two of the officers — Coppock and Combs — involved in this fatal incident were female suggests that discipline and training standards have been lowered for the sake of “gender integration,” which was a major policy push at the Pentagon during the Obama administration. It could be that senior officers, knowing their promotions may hinge on enthusiastic support for “gender integration,” are reluctant to enforce standards for the women under their command.
This was the story of Kara Hultgreen, the Navy pilot who died in a 1994 F-14 crash. Investigation showed that Hultgreen had been allowed to proceed in her training after errors that would have meant a washout for any male pilot. But the Clinton administration was pushing for female fighter pilots, which resulted in a competition between the Navy and Air Force to put women into these combat roles.
It is not necessary to believe that…
(a) women shouldn’t be fighter pilots, in order to believe
(b) lowering standards for the sake of quotas is a bad idea.
Of course, you may believe both (a) and (b), but it is (b) that gets people killed.
It seems obvious that the Pentagon (and the liberal media) sought to suppress full knowledge of what happened to the Fitzgerald in the immediate aftermath of the June 2017 incident that killed seven sailors, in the same way the details of Kara Hultgreen’s death were suppressed.
It took investigative reporters like Rowan Scarborough of the Washington Times a lot of hard work to find out what actually happened to Hultgreen. Let’s hope other reporters will dig into what’s happening in our military with the “gender integration” agenda at the Pentagon now.
Full article: http://militarycorruption.com/usn/hissy-fit/
Food for thought…

Did a "Cat-Fight" between female officers cause the untimely death of Navy Sailors during the USS Fitzgerald collision incident?!

Talk about setting the Navy back 30 years.

As a matter of fact, in the late 80s, I was recruited to serve in the Navy, while they were first integrating women to serve aboard tactical logistic vessels, in enlisted jobs, and I don't recall female officers or chief petty officers assigned to the USS Holland, a submarine tender, homeport in Charleston, SC at the time.

In the mid-2000s, for an entire year, I served as the only female officer aboard the USS STOUT, an Arleigh Burke-class guided-missile destroyer, and boy did I caught hell... But I learned team-work, and not let my gender or racial differences come between me and my male colleagues getting the job done, and especially protecting the lives of the crew, and preserving a billion dollar warship— While accomplishing a highly visible Pentagon mission!!

I am extremely disappointed to learn that it was “catty women,” behind the Fitzgerald collision, but I for one have been at the center target of scorned, catty, jealous and territorial female officers, when they would go to extreme lengths to behave like men, to "get rid of the competition," while trying to make a name for themselves, or in my case, violate the constitution by fabricating a legal case and holding others in the chain of command accountable, to abuse of authority and violation of judicial rules and procedures!! 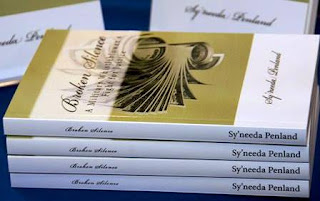 In the later chapters of my memoir, “Broken Silence, a Military Whistleblower's Fight for Justice," I chronologically detailed the illegal actions of Navy JAG officer, (then) LCDR Mei-Ling Marshall, how she even testified to her “personal interest” in the outcome of my May 2008 court-martial.

Last year, the Board for Correction of Naval Records (BCNR) response to Judge Rosemary Collyer’s remand order was a clear admission to the blatant abuse of authority and Civil Rights violations, and earlier this month, the Board of Veteran’s Appeal (Board) medically substantiated the blatant Human Rights abuse I endured upon my discharge, when senior Navy officials refused to provide me “Whistleblower Protection,” while putting me through emotional and physical distress, and further denying me my hard-earned pension benefits.

Yet I pray that the surviving family members of the lost sailors onboard the USS Fitzgerald receive the justice and monetary damages they deserve!!