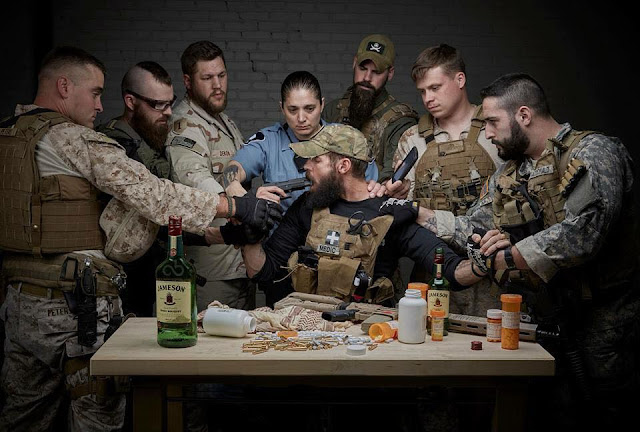 As much as I try to change the focus of my blog, and stay centered with "Positive Energy," more "Negative" news about our military, comes to my news feed and I feel compelled to share my thoughts.  Not as a seemingly disgruntled veteran, but as a person of compassion that is concerned about the lives of others...

When I served on active duty, one of my subordinates, a senior chief Store Keeper, suffered from bi-polar disorder and chronic depression, as a result of his divorce.  We were in the middle of deployment when he ran out of medication and his severe mood swings had a major impact on the entire battle group because we had to rendezvous with the carrier strike group to refill his medication.  Take about a month of HELL and detriment to the mission!!!

Recently, General Kelly made it clear, that our young men are "sacrificial lambs," to appease the beast, of our global military industrialized complex, as the Republicans increase the defense budget, to appease GREED, POWER, and WORLD Dominance...  Yet, I'm sure, Trump is happy to appease his buddy, Putin, and the Soviet's gradual rise to power, once again!!

But if you are going to deny transgenders medical coverage, by keeping them banned from military service, this is not fair!!  The cost of medicating service members is not cheap, unless, this is a power move for BIG Pharma?!!  WOW...  They are probably going to use the new "mentally disturbed" troops as human lab rats?!!  WOW!!!!    WOW.!!!!

Lastly, with ongoing sexual violence taking place in the military, and the upcoming agenda to put "women on the frontline" in combat, and the Pentagon's failure to protect women from harm: in the barracks, in the field, in the office environment, etc. and now, you are putting women in "double harm's way..."  to serve in combat alongside "mentally disturbed soldiers"  who may run out of medication, or may snap, while in the line of fire....  Really?!!!!  What the Hell?!!!  Something has to give!!!!

Excerpt from article:
WASHINGTON – People with a history of “self-mutilation,” bipolar disorder, depression and drug and alcohol abuse can now seek waivers to join the Army under an unannounced policy enacted in August, according to documents obtained by USA TODAY.
The decision to open Army recruiting to those with mental health conditions comes as the service faces the challenging goal of recruiting 80,000 new soldiers through September 2018. To meet last year's goal of 69,000, the Army accepted more recruits who fared poorly on aptitude tests, increased the number of waivers granted for marijuana use and offered hundreds of millions of dollars in bonuses.
Expanding the waivers for mental health is possible in part because the Army now has access to more medical information about each potential recruit, Lt. Col. Randy Taylor, an Army spokesman, said in a statement. The Army issued the ban on waivers in 2009 amid an epidemic of suicides among troops.
“The decision was primarily due to the increased availability of medical records and other data which is now more readily available,” Taylor's statement to USA TODAY said. “These records allow Army officials to better document applicant medical histories.”
But accepting recruits with those mental health conditions in their past carries risks, according to Elspeth Ritchie, a psychiatrist who retired from the Army as a colonel in 2010 and is an expert on waivers for military service. People with a history of mental health problems are more likely to have those issues resurface than those who do not, she said.
Full article:
https://www.usatoday.com/story/news/politics/2017/11/12/army-lifts-ban-recruits-history-self-mutilation-other-mental-health-issues/853131001/
Posted by Syneeda at 10:10 PM

Greetings from the UK. Good luck to you and your endeavours.

Thank you Andrew, wishing you many blessings as well!! ❤️💋❤️

American Genocide, once again. Satisfying the barbarism that continues to plague the world.