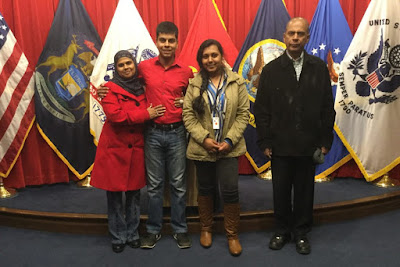 After a seven-day trial and 12 hours of deliberation, the eight-member jury found Gunnery Sgt. Joseph Felix, 34, guilty of maltreatment in connection with allegations he targeted three Muslim men at the Marines’ storied boot camp in Parris Island, S.C.

One of those recruits, Raheel Siddiqui, died when he fell 40 feet onto a concrete stairwell. Prosecutors said Felix forced Siddiqui to run back and forth in the recruits’ squad bay and slapped him in the face just before he sprinted from the room and jumped to his death. Two other Muslim recruits accused him of putting them in an industrial clothes dryer and, in one instance, turning it on.


Food for thought:  For reasons such as this, is why I continue my Fight for Justice!!  My prayers go out to Raheel Siddiqui's family, and other victims of Military Workplace Abuse!!

The rapidly increasing crimes, committed against fellow service members, needs to be properly addressed by an independent agency, outside the purview of the Pentagon, or else we will see more cases like this, as more members of "supremacist" groups continue to flood the ranks of our Armed Forces.  And there needs to be an enforceable law against ongoing Human and Civil Rights abuse in the Armed Forces!!

As a Native-African American, former military officer, I was subjected to ongoing Civil and Human Rights violations throughout my Navy career; and I was not alone!!

Throughout the pages of my memoir, "Broken Silence, a Military Whistleblower's Fight for Justice," I provide intimate details of my career experience, as a "minority female," rising through the ranks,  from seaman recruit to lieutenant commander, and the countless obstacles I was forced to endure, to prove myself, "200%" over my white counterparts!!

I decided to write and publish my story to help bring about public awareness, as to the atrocities that are being committed against active duty personnel, by their immediate supervisors.

Over the years, I've stood on the sidelines and monitored military issues, and observed how the Pentagon would rather turn a blind eye, rather than face the issues as it relates to improving Diversity within the ranks.  Even after hundreds of thousands of veterans have come forward with disability complaints, filed with the Department of Veterans Affairs; sworn testimony before the Senate, and Congressional Inquiries, relating to "Rape and Sexual Violence," the military's justice system remains flawed!! 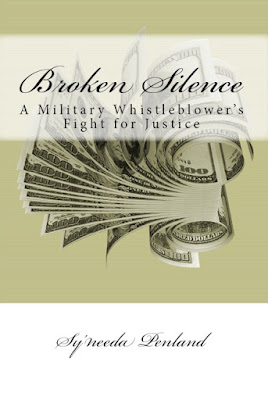 When I began my "Fight for Justice," early on in my case, I was severely punished when I decided to challenge the retaliatory acts that were being committed against me by my immediate supervisors.

I was a seasoned officer at the time, and I knew my rights and I'd previously served as a senior advisor to previous commanders to ensure they upheld the rights of their military staff members.  By challenging their abuse of authority was my way up upholding the "law" and preserving good order and discipline!!"  Boy was I wrong!!  Talk about "not knowing my place," was the lesson they wanted to teach me!!

In late March 2007, I was called to a meeting, ordered by the command's Chief Staff Officer, CDR John Ward.  The JAG officer, (then) Lcdr Mei-Ling Marshall, had prepared a preliminary charge sheet, hoping to intimidate me into signing it, to forgo my legal rights to due process, and I was never read my Miranda Rights throughout the entire legal process!!  Ironically, the Commodore, Capt. John Sturges, was "conveniently" out of the country on official travel when this particular retaliation took place.

A week prior to the meeting, while on vacation, I'd challenged Mei-Ling on her duties and responsibility to "uphold my Civil Rights protection," as an Attorney, required under the Bar Association.

As a member of a protected class, I'd informed them that their behavior was in blatant violation of my Civil Rights and the Chief Staff Officer, CDR John Ward, stated, "I don't give a damn about your Civil Rights," and they proceeded with their retaliatory acts against me.

I vividly describe the details of their behavior in the later chapters of my memoir, as well as their overall motives!!!!!!!

It doesn't take a rocket scientist, or a federal judge to determine that I was punished for challenging the unlawful behavior of my immediate supervisors; which included, but were not limited to: abuse of authority, unlawful discriminatory practices, whistleblower retaliation, fraud against the government and for submitting hundreds of incriminating documents to the Navy IG officials.

Instead of the Navy IG investigator, Dave Brownell,  upholding his duties to protect the government against fraud, he, in turn, protected the interest of his bosses and compromised the "investigation"  from the very beginning; while blatantly violating my Whistleblower Protection.

In August, the Board for Correction of Naval Records FINALLY rendered its decision on my clemency request; it was unfavorable of course... Which is what I was expecting!

In their 11-page finding, they cited over a dozen violations of my "Protected Communication," to include over a dozen "Personal Actions" that were committed against me as a Whistleblower, yet the Board decided to uphold my conviction and challenged me to take my case to a Federal District Court, who has jurisdiction over the Navy?!

Unfortunately, the retaliatory acts committed against me were in blatant violation of my Human Rights, and this is a matter for a Higher Court to decide!

There needs to be a Senate Investigation into the ongoing criminal activity, committed against hundreds of thousands of other veterans, including those that were murdered, to cover-up crimes of Human Rights violations; such as the case of PFC LaVena Johnson, Maj Gloria Davis, and thousands of other murdered victims, whose cases were never properly investigated by the military's criminal investigating agencies.  The NCIS even ignored my case, after it was referred to them by a senior DCIS agent, who was tasked by the Department of Justice Anti-Trust Division, to investigate my evidence.

When the DCIS agent contacted the Navy IG, he was informed that my case was Closed, and there was no need for an investigation; translation, "We don't want to deal with this matter because it involves "High Ranking officials!!"   I digress....

In the BCNR's findings, they stated that I’d failed to provide supporting documentation to support my claims.  Really?!  Yet, in the arguments by the US Attorney's office, while defending the former Secretary of the Navy, Ray Mabus, in my Civil Action case, they stated that the Navy was in possession of thousands of documents relating to my case, and personnel file.   So why did the BCNR failed to review or acknowledge these documents?!

I'm still baffled by the BCNR's final decision, and the blatant incompetence of the reviewing official,  ret. CDR Jessica Pyburn, who stated in several emails, during the year-long wait I was forced to endure, that she was "overwhelmed" with backlogged cases and did not have time to review my documents, yet in the decision letter, the Board stated that I'd failed to provide documents?!  Really?!  SMH!!

For the past 10 years, my case managers were well aware that I never leave a stone unturned, while defending my case, and will overload you with documents to support my claims.  While arguing my Civil Action case, I provided a mere sample of incriminating emails, and other documents, and will furnish more evidence to support my claims of fraud against the government in my next lawsuit.

Interestingly enough, the main documents the reviewing official requested were those relating to the Qui Tam petition that I'd filed with the Department of Justice Anti-Trust division in early June 2009; surrounding evidence of senior command officials engaging in "illegal" revolving door practices and contracting bid-rigging practices, with senior executives of the defense contracting company, Logistics Support Inc, a Veteran "stock-owned" company.

It appeared that the BCNR was more interested in that particular information, rather than upholding Justice, which was clearly stated in the year-long email thread.

Yet, I do recall the last conversation I had with the DOJ Anti-Trust division senior prosecutor, Attorney Shane Cralle, where he'd stated that his boss told him to "drop my case!"  Even after I provided him enough incriminating evidence to launch an immediate investigation.  And years later, the Fat Leonard Scandal, has proven that senior Naval officials have been engaging in fraud against the government for over 25 plus years!!

Without proper checks and balances in place, our military will crumble to its core, much like what is happening to our Congressional body of government!!
Posted by Syneeda at 12:06 AM