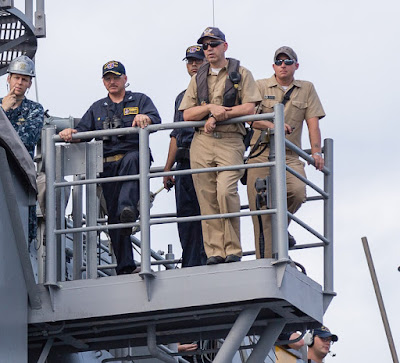 Capt. Aycock looks on as the Shiloh is brought into dry dock for scheduled maintenance. (Lt. j.g. William McGough/Navy)

Sailors aboard the cruiser Shiloh during the 26-month command of Capt. Adam M. Aycock often worried about the CO’s use of one of the Navy’s most arcane punishments: confinement for three days in the brig while being fed only bread and water.

Over time, Aycock’s proclivity for using bread and water to punish junior sailors became well-known on the Yokosuka, Japan, waterfront, where the Shiloh is based, according to sailor comments in three of the ship’s command climate surveys.

“I do not wear my ballcap at the (Navy Exchange store),” one sailor wrote. “Even the taxi drivers on base know us for being the ‘USS Bread and Water.’”

“Were [sic] are known for beating our people down for bread and water,” another wrote. “Not the work we do.”

‘I now hate my ship’: Surveys reveal disastrous morale on cruiser Shiloh
Morale aboard the cruiser Shiloh plummeted during the command of Navy Capt. Adam Aycock, making the ship the butt of jokes on the waterfront in Yokosuka, Japan.  By: Geoff Ziezulewicz

Fears about bread-and-water punishments were among several recurring complaint themes in the three surveys during Aycock’s command, obtained by Navy Times.

Aycock declined to comment for this story via a spokesperson at the Naval War College, where he is now stationed as a researcher.

On July 6, 2015, less than two weeks after reporting to the Shiloh, Aycock handed down what records indicate was his first bread and water sentence.

That first sailor had been late for curfew and absent without leave, according to records obtained by the Navy Times via a Freedom of Information request.

At least six other Shiloh sailors would receive bread and water under Aycock, for offenses that included curfew violations and underage drinking, the records show.

One sailor got bread and water in part for lying about his mother living “in a dangerous area,” according to records.

Several sailors wrote in the surveys that the infractions were the type of thing that should have been corrected by enlisted leadership.

Wallace Lovely, a retired captain who led Destroyer Squadron 31 and the frigate Samuel B. Roberts, recalled giving out bread and water once, at the urging of his chiefs, instead of administratively separating a troubled sailor.

Other retired skippers also said the action is rare.

“To hear that [bread and water] was used with frequency is unnerving,” Lovely, who retired last year, said in an email. “And to hear time and time again that threats of punishment were held over heads is unfortunate.”

The command surveys reveal sailors outraged by bread and water, worrying that minor, on-the-job mistakes would get them taken to captain’s mast.

“If SN Timmy shows up for work 20 min [sic] late or gets into…what anyone would call a minor incident they are sent to the brig and get the Command Bread and Water special,” one sailor wrote in the August 2015 survey.

“The most absurd charges are used to send sailors to the brig and put them on bread and water,” another wrote. “The poor treatment of this command’s sailors has led to more than one sailor changing their career plans and choosing to leave the Navy rather than stay in and deal with any more of this garbage.”

The first sailor that records show Aycock disciplined with bread and water was a Fire Controlman 3rd Class, an E-4, according to records.

Navy regulations state bread and water can only be dished out to sailors ranked E-3 and below.

But records from that case show the sailor was busted down a paygrade for the same infraction.

Emails obtained by Navy Times also show officials with Regional Legal Service Office were asking questions about Aycock’s use of bread and water.

Those records were heavily redacted when provided in response to a Freedom of Information request, and Navy Times is appealing the redactions as well as whether all requested emails were provided.

“The CO is very strict and we’ve had at least five Article 15s with Bread and Water punishments since I’ve been here!” a ship secretary wrote in a 2015 email.

Navy officials declined to say where the Shiloh sailors served the three-day punishments, but the Navy has a brig facility at Yokosuka, where the cruiser is based. 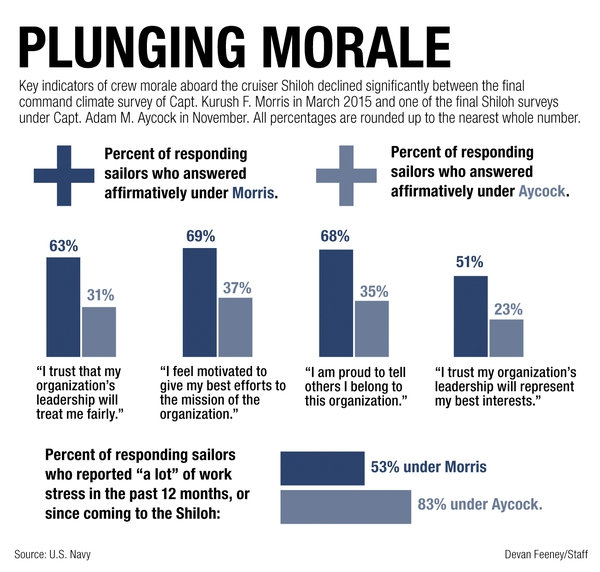 Officials were also unable to provide a number regarding how many bread and water punishments have been handed down by COs of other 7th Fleet vessels.

Ending bread and water is one of a set of military justice reforms included in last year’s defense bill that are awaiting President Trump’s signature.

“Bread and water is a punishment that i [sic] feel should be reserved for those that commit the highest of offenses,” one Shiloh sailor wrote in a survey. “Ship, shipmate, self is often preached onboard this ship but I believe it needs to be revised. A happy crew is a healthy crew that will stick up for each other and band together.”

Wow...  I worked with Surface Warfare Officers the majority of my officer career and they truly believe in "Eating their Young," from the junior officers, down to "Seaman Timmy."

And folks thought I was lying about my experience in the brig...  And we all know why I was singled out to be punished, but to feed our kids bread and water?!! WTF!!!!

There are better jobs in this country than to have to suffer such cruel "on the job"  punishment!!

I failed to mention how senior Pentagon officials also turn the blind eye on claims of Rape and Sexual assault!!!
Posted by Syneeda at 1:39 PM