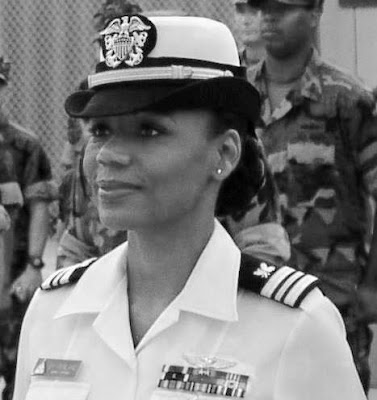 This letter comes to you with a sincere heart, as a disabled military veteran, and descendant of Cherokee and African American lineage.

At the young age of 18, I swore an oath to defend our country and the Constitution, when I enlisted to serve in the US Navy as a seaman recruit.

It was not only a privilege that I enlisted at the height of the Navy’s “equal employment opportunity” experiment, of female integration aboard our Navy’s warships, it was an absolute honor to stand in allegiance with other proud American patriots, who were (are) willing to sacrifice their lives in defense of our Constitution.

After serving 7 years enlisted, overcoming sexism during my first duty assignment, I’d opted to no longer serve our country, after bearing witness to blatant discrimination against African Americans, and other minorities, who were assigned to work at a remote command in Chesapeake Va, in the Navy’s intelligence and cryptologic community.

Fortunately, before my discharge, I’d met all the necessary qualifications to earn a commission.  During my 7-month break in service, I decided to adhere to the advice of several mentors and decided to apply for a commission via Officer Candidate School (OCS).

During my OCS training, I would experience more sexism and racism and I graduated as the sole female candidate in my class, this was in 1997 and the rest of my career would mimic my previous experience(s).

My intent to become an officer was to implement change and diversity, and I’d hope to positively influence the minds of the racists and misogynistic leaders, who continue to dominate the senior ranks of our Navy.

Throughout my enlisted and officer career I’d faced huge obstacles as a “double minority,” each of them tested my resolve, while I was constantly forced to apply 200% of my work efforts, compared to my white-male counterparts, who were more concerned with being a part of the “good-old-boys club.”  And you wonder why the fleet is experiencing mishaps, most likely due to training deficiencies!   I digress.

I chronologically highlight my military career experience in my memoir, Broken Silence, a Military Whistleblower’s Fight for Justice, which was written and published while challenging the Navy’s Civil Rights policies, as I continue to face ongoing retaliation from the Navy’s injustice system. Civil Action No. 13-1465 (RMC).

As a military Veteran, who opened my heart and efforts to fight for other victimized and traumatized veterans, by establishing a legal precedent to serve as an avenue to challenge the systemic retaliation practices within the military’s judicial system,  I was appalled by the unprecedented actions of Vice President Pence during the Indianapolis Colts and San Francisco 49ers game yesterday, where he began a rant of public tweets, stating that he’d taken orders from you, Mr. President, to “Walk out of the Game,” should the players kneel before the flag, as a means to bring about public awareness to ongoing police brutality against African Americans, throughout their communities.

Having paid tribute and honor to our flag and national anthem, I expect a higher degree of professionalism from our elected political leaders, primarily as it relates to Civil and Human Rights violations, in-Justices and in-Equality treatment of All American citizens, which is what I’d sworn an oath to protect and defend, against all enemies, foreign and domestic.

In the military, each servicemember is held accountable for their actions under the  Uniform Code of Military Justice (UCMJ), should they violate the UCMJ they are to be punished, which is not always the case; yet as a victim of military injustice, which is highlighted throughout my memoir, Broken Silence, a Military Whistleblower's Fight for Justice, I understand why African American athletes are taking a stand against countless injustices that have plagued their communities, for centuries.

These young men are football players, not senior politicians, or the President or Vice President of our country, and they are paid to provide public entertainment, yet similar to my military experience, they are taking a huge risk to stand against injustices that are being committed against minorities.

During the 60s, Reign of Terror, that swept across this nation, traumatizing our nation's citizens,  President Johnson did the inevitable with the passage of the Civil Rights Act, by granting Civil Rights protection to members of the unprotected class and upon my birth, I benefited from the passage of the CRA, but unfortunately, those rights were not extended to me as a Naval officer, at the height of my personal-professional controversy with the Navy’s in-justice system.

President Trump, as you are seeking advisement from your top generals and admirals to prepare our military for the next war campaign, and assign women to serve in combat-related positions, I ask that you try walking in our shoes, or the shoes of other minorities serving in uniform, or the shoes of other minorities in this country, whose Civil and Human Rights are being violated on a daily basis.

As a non-African American, nor military veteran, or a minority for that matter, I would not expect for you to fully understand our ongoing Fight for Justice, and Struggle for Equality, as our society is rapidly evolving into what is becoming the new minority, “The Underrepresented and Misunderstood” class of American citizens.

As the current leader of our White House Administration, it is your elected and moral duty to uphold our Democracy, and I’m sure the majority of Americans citizens expect more professionalism from our leaders, therefore I ask that you take a moment to reflect on your actions since you’ve been in office, and I ask that you do the honorable thing, like passing a Human Rights Bill that will serve to benefit ALL American citizens, to put an end to what has become of our failing nation.

I leave you with one last thought…

President Obama once said…. You don’t need a poll to know that the vast majority of – Republicans, Democrats, and Independent – are weary of the dead zone that politics has become, in which narrow interest vie for advantage and ideological minorities seek to impose their own versions of absolute truth.

Whether we’re from red states or blue states, we feel in our gut the lack of honesty, rigor, and common sense in our policy debates, and dislike what appears to be a continuous menu of false or cramped choices.

Religious or secular, black, white, or brown, we sense–correctly–that the nation’s most significant challenges are being ignored, and that if we don’t change course soon, we may be the first generation in a very long time that leaves behind a weaker and more fractured America than the one we inherited.  Perhaps more than any other time in our recent history, we need a new kind of politics, one that can excavate and build upon those shared understandings that pull us together as Americans. --- The Audacity of Hope, Thoughts of Reclaiming the American Dream.

Lastly, to Make America Great Again is to expound upon the vision of the leaders who held this country together before you, not dismantle America from her core, through ranting tweets.  Independent of experiencing sexism from single-minded former military leaders, I was proud to serve our country and to uphold a creed, to what I believe that makes this country great, “True American Patriotism and Respect for our Nation, as a whole!”


Military Veteran
Posted by Syneeda at 1:11 AM

This is a powerful statement and I’m sure you mean well but the National Football League is big business and Trump owns large shares in it so he is simply protecting his business investment.

Wow, so that explains his behavior, which is extremely unpresidential!!