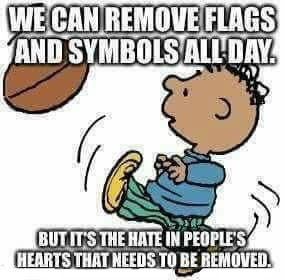 We can remove Flags
and Monuments all day,
but what will it take
to make the pain go away?

His failure to reshape the world
into what he thinks it ought to be;
His failure to be better than
the next man – One who's skin
is as dark as night;

Bearing the resemblance of
the canvas that reflects his
heavenly stars at night,
as he's proven to himself,
time and again, for centuries,
that black don't crack;

The black-back that has survived
the brutal lashes of his oppressor –
evident in his new-born seeds;

His sons now OWN the gridiron,
as if he'd invented the game
called Football, that is
systematically designed to profit
from his labors;

As centuries-long past,
the enslaved mind-body and Spirit
is once again a Slave to his choices
in life, while he’s paid handsomely to
lead the charge of the next-born generation;

As they are herded like cattle to be
the next Jim Crow that will never fly
like the Eagle in the sky, but will
leap across the in-zone and score points
on a scoreboard, while bets are made
and paid, as new strategies are being designed
to build larger coliseums to display
"The best of the best" amongst
the mascots of the wild kingdom.

If only Love was poured into
the hearts and minds of our children,
maybe… Just maybe we can produce
an enlightened generation of  Monks
or Spiritual Gurus, to lead the charge…

Who knows… But in the end…
Love Conquers Hate!
Posted by Syneeda at 1:00 AM

Syneeda, It's hard to believe that you were in the military, and not sharing your talents with the world.

This is an interesting perspective on the ongoing NFL controversy and you did a wonderful job. I like how you captured it, historically and realistically. Bravo... Bravo...