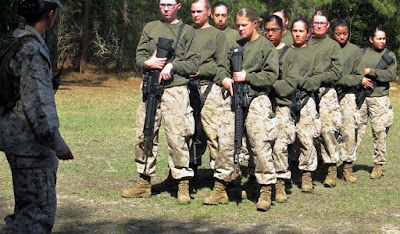 Top brass in the U.S. Marines are denouncing in vigorous terms misbehavior by Marines online, including photographing and sharing photos of women recruits and veterans and making salacious comments about them.

“There is no place for this type of demeaning or degrading behavior in our Corps,” said Sergeant Major Ronald L. Green, 18th Sergeant Major of the Marine Corps in a statement to CBS News.

Green was responding to reports published by the Center for Investigative Reporting that hundreds of Marines are being investigated for using social media to solicit and share hundreds — possibly thousands — of naked photographs of women service members and veterans.

“Let me be perfectly clear; no person should be treated this way. It is inconsistent with our Core Values, and it impedes our ability to perform our mission,” said Sergeant Major Green.

On its Reveal web site, the Center for Investigative Reporting found that since Jan. 30, more than two dozen women, including active duty and enlisted service members had been identified by their rank, full name and military duty station in photographs posted and linked to from a private Facebook page called “Marines United.”

In one instance cited in the report, a woman corporal in uniform was followed at Camp Lejeune in North Carolina by a fellow Marine, who surreptitiously photographed her as she picked up her gear. The picture was posted to the Marines United private FB page, where dozens of obscene, sexually explicit comments were posted.

A Marine Corps official told CBS News’ Cami McCormick that when they learned of the private website, they started asking questions and “within hours the site was gone.” 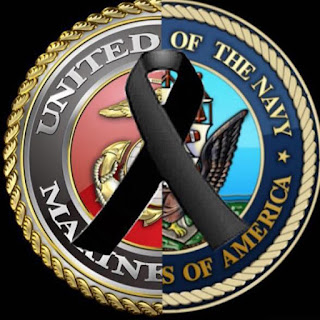 “Whoever runs it kept moving it, making it hard to even find what the scope of it was’, said the official, adding that the Naval Criminal Investigative Service is looking into the matter. The official expressed sympathy the women involved.

“People will immediately start blaming victims, and we are most concerned about them. They may have taken pics meant to be private and then those images could have been shared by a former close friend. So many questions that we just don’t have answers to at this point.”

The online activity was first posted by The War Horse, a nonprofit news organization run by Marine veteran and Purple Heart recipient Thomas Brennan, who wrote the piece for the Reveal web site.

Within hours Brennan became the target of online threats, like “waterboard this p-o-s” and “I’ll pay 500 to the dude that can get good nudes of his girl.”

On Sunday, The War Horse web site had a popup message with information on how to report harassment related to Marines United -- and a contact number for the Naval Criminal Investigative Service which is investigating.

“Do you think you are or may have been a victim of sexual harassment or misconduct on Marines United?

Both active military and civilians can report a crime or share information on Marines United discreetly, anonymously and safely to NCIS via text, the web, or the NCIS smart phone app. The NCIS number is (877) 579-3648.”

“The Marine Corps is deeply concerned about allegations regarding the derogatory online comments and sharing of salacious photographs in a closed website. This behavior destroys morale, erodes trust, and degrades the individual. The Marine Corps does not condone this sort of behavior, which undermines our core values. As General Neller said in his recent Message to the Force, the Marine Corps’ success in battle depends on trust, mutual respect, and teamwork,” said Captain Ryan Alvis, a public affairs officer for the Marines. 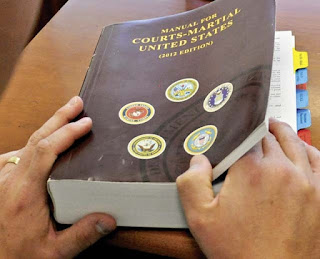 “The Marine Corps takes every allegation of misconduct seriously. Allegations of misconduct are thoroughly investigated and handled at the appropriate judicial or administrative forum. A Marine could potentially be charged for violating Article 133 (for officers) or Article 134 of the Uniform Code of Military Justice (UCMJ). If a Marine shared a photo of another person that was taken without that person’s consent and under circumstances in which that other person had a reasonable expectation of privacy, the Marine may have violated Article 120c, UCMJ, for broadcasting or distribution of an indecent visual recording. A Marine who directly participates in, encourages, or condones such actions could also be subjected to criminal proceedings or adverse administrative actions.” 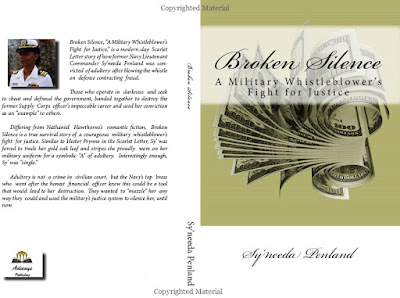 Food for thought:  I’ve received a number of calls from media journalists for a quote on this topic.  For the record, “I’m on the fence…”  Considering that I was prosecuted, sentenced to serve 60 days in prison, fined almost $10K and was discharged from the Navy – months shy of reaching my 20-year retirement eligibility, on specious grounds of “adultery,” surrounding NUDE pictures.

My case remains one of the military’s most hypocritical “sex scandals” that never made its way to mainstream media, second to General David Petraeus’ adultery sex scandal.

Early last year, Honorable Rosemary Collyer made her final ruling on my Civil Action (Discrimination) lawsuit against Navy Secretary, Raymond Mabus, nearly a year later, to date, the Navy stands behind its decision to uphold my conviction, as they continue to deny me my hard-earned retirement pension benefits and for Human Rights abuse, punitive damages.

Yet the irony with this particular sex scandal begs the question(s),  “Why did the (female) Marines take nude pictures of themselves in the first place, and whether or not they were involved in relationships with “married” colleagues?  If so… Will the Pentagon seek further investigation/prosecutions for sex crimes committed by both parties?  Considering the Navy has already established a legal precedent by upholding my conviction.

Yet unfortunately, their entire case against me hinged on the testimony of an estranged ex-wife (an enlisted person), who was reported to have violated Article 134 of the Uniform Code of Military Justice (UCMJ); sharing a photo of another person that was taken without that person’s consent and under circumstances in which that other person had a reasonable expectation of privacy, for broadcasting or distribution of an indecent visual recording; according to Marine Corps regulations; any person who directly participates in, encourages, or condones such actions could also be subjected to criminal proceedings or adverse administrative actions.”

During my incarceration, the DoD’s Brig Commander was livid over my mistreatment and stated that, “The DoD will have to build more prisons - should commanders start “prosecuting” personnel for committing adultery.

On another note, why is the military still having problems with “gender integration” in 2017?!

When I served onboard a Navy warship as the only female for an entire year, in late 2004-2005, assigned to a crew of over 300 men, I ensured the commanding officer provided me a “Safe and Harassment Free Workplace,”  by enforcing the federal Civil Rights Act regulations.  At the time, we had a critical mission to accomplish and there was no time for “gender” (and racial) discrimination issues!!!

As a senior Staff Corps officer, I was groomed throughout my officer career to never bring any negative attention to myself to further agitate an “all-male” working environment.  As a black woman, my presence was painful enough… So I was always told…

As far as the nude photographs surrounding the “adultery” allegations brought against me….  There was never any respect for privacy from the beginning of my case. And anyone who has ever served in the military knows that when you are brought before a Unit Commander to defend yourself against allegations of any sort, you are GUILTY as Charged!!

Similar to a public defender, the staff’s lawyer will persuade you to “plea” guilty and forfeit your right to a fair trial!!”    In my case, I was bullied by members of my executive staff. By the time my case went to trial, Navy prosecutors had solicited to nearly the entire senior JAG Corps and Supply Corps officer Community in San Diego, as well as a dozen enlisted and civilian contractor personnel (my colleagues at Naval Coastal Warfare) the nude photographs that were used as evidence in their defense.  The photographs eventually made their way to the Pentagon and certain “military bloggers” and “Intelligence” agencies, after I’d announced I was working on the release of my memoir, “Broken Silence, a Military Whistleblower’s Fight for Justice.  Talk about an invasion and violation of my Rights to Privacy, as a disabled military Veteran!!

As I type this blog, I tremble, reflecting back to my military tribunal, the humiliation I was forced to undergo as a result of retaliatory acts, orchestrated by senior members of my direct chain of command.

During my entire trail, I was forced to stare at a monitor screen, broadcasting nude photographs that were on display to prejudice the jury.  In the end, Navy prosecutors got exactly what they needed, a conviction, to discredit any reports of fraud that I’d reported to the DoD IG investigators.  A year later, after learning that I’d reported their corruption activity outside the DoD’s chain of command, to the Department of Justice Anti-Trust division, they sought to punish me even more by revoking my security clearance, denying me proper healthcare treatment after a senior Navy Medical Board at Balboa Medical Center recommended that I remain on active duty to undergo extensive chemotherapy treatment to treat a rare blood-disorder I’d subsequently developed as a result of battling their excessive mistreatment, cruel and unusual punishment, and ongoing retaliation.

As a survivor of the military’s Injustice System, I’ve had to come to terms with accepting the fact that some people chose to work for organizations that condone violating the rights of others and devote their lives to upholding such an unjust workplace-legal system that prey on violating the Civil and Human Rights of others.  Yet Human Rights Laws in America currently doesn’t exist, and is decades past due!!

Before I close this chapter of my life, I offer one final bit of advice to our senior military leaders as well as to senior members of our congress…..

“As a retired well-seasoned officer, I see this “scandal” as a major issue surrounding the “Health and Welfare of our service members.” IT DOES POSE A THREAT TO OUR NATIONAL SECURITY!!  It’s a simple case of piss poor training and piss poor Equal Employment Opportunity Management, which has always been a “foreign language” to the military’s top brass. And this issues has the potential to lead to an influx of VA disability compensation claims for "Military Sexual Trauma."

There should also be a STANDARD MILITARY RULE against “Taking” NUDE pictures, “Distribution” of NUDE pictures or any “Discussion” of Nudity in the workplace; which extends to the field, barracks, liberty ports, social media etc.!!