The Firing of Sally Yates was Blatant Retaliation, compromising her Oath of Office and her duties to Uphold the Constitution.

When I last served on active duty in the Navy as a budget officer, in an attempt to carry out my fiduciary duties as a Supply Corps Staff Officer, I was fired from my appointed position and severely punished after challenging my superiors for committing fraud against the government and violating my Civil Rights.

In the later chapters of my memoir, Broken Silence, a Military Whistleblower's Fight for Justice, I highlight my gruesome experience. 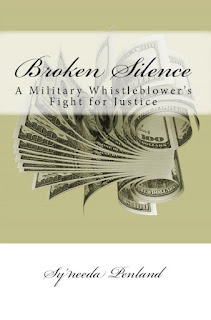 After years of fighting for Justice, last April, I successfully won my Civil Action lawsuit against the Navy's Secretary, Raymond Mabus. The judge cited, Whistleblower Retaliation and the Navy has yet to properly respond to the Judge's Court Order.

After learning about Sally Yate's dismissal, for doing her job, I'm totally convinced that once you challenge the Evil objectives of the Good Ole Boys, they will FIRE you at will, lock you away in prison, which was my unfortunate fate or even murder you, which was the fate of my dear friend, Major Gloria Davis.

The take away from Sally's ordeal is, "If we continue to ignore the Constitution, we will weaken the moral fabric of our nation!!  Without checks and balances, EVIL will eventually morally corrupt or Nation!!"
Posted by Syneeda at 8:36 PM