More and more generals and admirals are coming forward to warn us about Donald Trump. They recognize the danger that he poses to America.  Admiral Michael Mullen is the latest high-ranking officer to criticize Trump. He just wrote an op-ed in the New York times denouncing Trump’s decision to put Steve Bannon on the National Security Council.  Admiral Mullen is a former chairman of the Joint Chiefs of Staff. He served under George W. Bush and Barack Obama.

Mullen has a lot of experience when it comes to national security matters. So when he talks, we should listen.

Admiral Mullen is deeply troubled by Trump’s addition of Steve Bannon to the Security Council. He believes that Bannon has no place there.

The admiral wrote, “Putting aside for a moment Mr. Bannon’s troubling public positions, which are worrisome enough, institutionalizing his attendance threatens to politicize national security decision making.” The security council is meant to discuss how best to keep the country safe, not to engage in politics.

But Trump has undermined the function of the Security Council by removing its most prominent members. Trump removed both the current chairman of the Joint Chiefs of Staff and the director of National Intelligence from regular meetings of the council.

The absence of these experts leaves a gaping hole in the council. Trump filled that hole by assigning Bannon to the council instead.

But Bannon has no national security expertise. He doesn’t have anything to contribute other than crazy conspiracy theories.

Admiral Mullen recognized this problem and wrote, “In my experience, there are very few — if any — meetings of the principal committee at which the input of the military and the intelligence community is not vital. With an increasingly belligerent Russia, tensions in the South China Sea and a smoldering Middle East, it makes little sense to minimize the participation of the professionals leading and representing these two groups.”

Trump, however, seems to think that he knows more than our generals and admirals. He continues to ignore their advice, and is putting our country in greater danger. 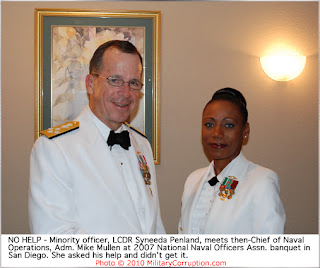 When one of my dear friends shared this article on his Facebook feed, I immediately had a flashback to the time I had a personal encounter with Adm. Michael Mullen, months before he was promoted to serve as the Chairman of the Joints Chiefs of Staff, under President Obama's Administration.

In July 2007, when Mullen served as the Navy’s highest ranking officer, Chief of Naval Operations, I met him at a dinner banquet where he was a distinguished guest.  During our conversation, I tried to tell him about ongoing fraud and corruption I’d uncovered as a budget and contracting officer at Navy Expeditionary Combat Command (NECC); that I was a whistleblower; and that I’d been retaliated against for my efforts; and that his office was in receipt of my EEO complaint.

Not only did he quickly dismiss me, he uttered… “Good Luck!”

Judge Collyer's ruling came 9 years after my initial “official” complaint, filed with the office of the Secretary of the Navy and the Navy and DoD Inspector General's office; reporting irrefutable evidence of defense contracting fraud, misappropriation of War Funds, whistleblower retaliation, racial and sexual discrimination and years of pain and suffering, along with a loss of my hard earned military retirement pension benefits.

As a former Staff Corps officer, I was trained to uphold the Constitution while obeying the orders of the President, and I was punished for doing my job.

When I sit back and absorb the negative energy from the political turmoil throughout this country and internationally; how key “military advisors” are feening for another “War Conflict,” my senses tells me that they are also planning to line their pockets in the interim!!!
Posted by Syneeda at 9:45 PM

Syneeda,
Top ranking senior Navy officers, retired-active duty, have been secretly lining their pockets for centuries. This is nothing new.

Just recently, a large percentage of senior Navy Admirals were cleared of their involvement in the nearly 20 year scandal involving the Malaysian billionaire and US Navy husbanding agent for the Navy's 7th Fleet Area of Operations, Leonard Glenn Francis, founder of Glenn Defense Marine Asia (GDMA).

I recall you blogging about the "Fat Leonard" scandal. Here's a wiki link to it, although a lot of the facts are left out and I’m sure, Mike ensured his “buddies” were all vindicated. https://en.wikipedia.org/wiki/Fat_Leonard_scandal

Yet I hope President Trump pumps the brakes with these renegades before we see another case similar to Kennedy's assignation and it’s foolish of him to keep Steve Bannon on as one of his top “intelligence” advisors and everyone knows that Pence can’t be trusted!! He should consider bringing Paula Broadwell on board.

The last time Mullen was this outspoken is when he lobbied before Congress to get funding for the Navy’s Expeditionary Warfare missions in the 5th Fleet AOR. After he became CJCS, he also kept President Obama distracted with the military gay rights scandal. This is when you first came forward about the fraud you’d uncovered and yes, you were punished severely for doing your job. I’ve handled your case over the years and I must say, ‘What an impressive background…” Former Inspector General, Intelligence Community, Budget Officer, Joint duty and several operational shipboard assignments. When they the Navy let you go they loss a valuable asset and I’m sure you possess other remarkable gifts, telling by your blogs and poetry if may add. I’m truly sorry the Justice Department didn’t take your Qui Tam claims seriously, but at the very least, your Honorable Judge Collyer gave you some sort of relief for your pain and suffering. Yet I hope you get all that you deserve in the end. Keep up the good fight!

Your fight isn’t over until the world knows of the injustices the Navy committed against you.

Lastly, it’s been rumored on the deck plates that a number of retired officers have taken over a large majority of the contracting activity in the 7th Fleet AOR since their take down of Leonard Francis. President Trump should order an investigation into their criminal activity to put an end to this charade.

Anon, I'm very familiar with the Navy's 20 year Fat Leonard scandal and one of my dear friends was caught in the middle of it; for simply doing his job!! They love to point the blame on the lower ranking officers, but it seemed that the higher we climbed as minorities; we were one step closer to becoming corrupted like the "Good Old Boys." The day I was promoted to LCDR, I was propositioned by a few senior officers to join their "corrupted fiefdom." Since I chose to take the moral high ground, my career soon came to a corrupted end and I could no longer be of service to HUmanity in that way. My situation with the Navy was of significant Spiritual relevance and I’ve always been purpose driven!! Frankly I'm done blowing the whistle on financial corruption because it seems to be the norm throughout the world!! I'd rather be of Higher Service to HUmanity, its more Spiritually Rewarding!!!!

I woke up this morning with love and compassion in my heart!!