Why haven't Loretta Lynch been forced to resign? The question of the day!! 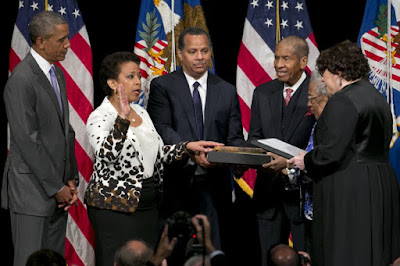 Attorney General Loretta Lynch said Sunday that the fallout from her tarmac meeting with former President Bill Clinton was "painful" for her.

"I do regret sitting down and having a conversation with him, because it did give people concern. And as I said, my greatest concern has always been making sure that people understand that the Department of Justice works in a way that is independent and looks at everybody equally," Lynch said on CNN's "State of the Union."

"And when you do something that gives people a reason to think differently, that's a problem. It was a problem for me. It was painful for me, and so I felt it was important to clarify it as quickly and as clearly and as cleanly as possible." 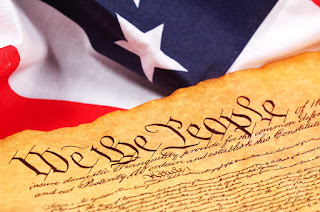 Her obvious “lapse in judgment” during one of America’s most critical election seasons, at the height of  nation-wide civil unrest, countless Human and Civil Rights violations throughout America’s inner cities; abuse of authority and corruption at nearly every level of our local and federal law enforcement agencies – including the military; and their inability to uphold their oath by putting the public’s interest first, makes you question the leadership at the top!!

When I came across this article, I was truly disappointed to hear her explanation on the ongoing Clinton saga, yet it opened old wounds about my own personal dealings with the Department of Justice, which began in mid to early 2009, when I filed a Qui Tam petition with the Justice Department Anti-Trust division, to report irrefutable evidence of military fraud and corruption, involving my superiors and senior Pentagon officials and senior members of a veteran owned logistics company, engaging in defense contract bid-rigging, revolving door practices, re-sale of military training and warfare gear, misappropriation of war funds, un-authorized building projects, sole-sourcing (involving kick-backs), and a laundry list of other federal acquisition violations; all supported by incriminating budget documents, emails, etc. 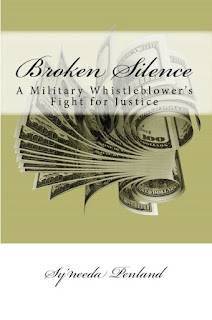 For over a year, I’d worked closely with senior prosecutor, Shane Cralle, of her Anti-Trust division, linking key evidence together, providing the “Who, What, When and Why?”

In the later chapters of my memoir “Broken Silence, a Military Whistleblower’s Fight for Justice,” I provide a detailed chronology of events, including names, agencies, and the intent to cover-up my high-profile case as a military whistleblower; because of the retaliation I endured, my case received national attention.

I stopped promoting my story several months ago after my websites were hacked by Russian spies, I’m still receiving a lot of activity on my blog site from Russia, who most likely have linked-in to the DoD’s INTERPOL files?    I digress…

I always had a problem with incompetence when I served as a military officer, and truth be told, our government needs a complete overhaul, one that is truly for the people!!
Posted by Syneeda at 11:04 AM