Did Justice Prevail? Military Adulterous and Swinger, Maj General David Haight, Reduced in Rank and Forced to Retire Below Grade. No Prison Time!! 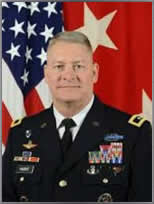 ARMY MAJOR GENERAL BUSTED DOWN TO LTC
AND FORCED TO RETIRE - DAVID HAIGHT REDUCED
IN GRADE AFTER BAD PUBLICITY - LOVER-BOY
WRITTEN UP ON MILITARYCORRUPTION.COM FOR
AFFAIR WITH DOD GAL PAL AND PATRONIZING
SWINGER'S CLUB NEAR ARMY WAR COLLEGE AT
CARLISLE BARRACKS - FORMER FLAG OFFICER
WAS DIRECTOR OF OPNS AT EUROPEAN COMMAND

Well, what do you know? Pigs DO fly in the air, at least once in a great while.

Remember our stories on sex-mad lover-boy, MAJ GEN David Haight, who was exposed in a long-term affair with a DOD female worker, plus his jaunts to a swinger's club located between Carlisle Barracks and Harrisburg, Pa.? He was an enemy agent and blackmailer's dream.

MilitaryCorruption.com and other media outlets blew the whistle on the former two-star, now reduced in rank (pension-wise), to lt. colonel. That bust will cost Haight big bucks. If he had gone out the back door "in grade," as his Pentagon buddies and the folks at the determination board hoped would happen, he would've cleaned up $122,800 a year. Now, with 30 years of service and retirement at 0-5, he'll get around $80,000 annually.

Like we said in one of our earlier stories on this flag officer, the 11-year dalliance with his DOD gal pal has turned out to be a very expensive piece of ass.

HAIGHT ONE OF MANY GENERALS


CAUGHT WITH THEIR PANTS DOWN


We will take a bow for blasting away at the DIFFERENT SPANKS FOR DIFFERENT RANKS deal that Haight almost got away with. MCC, and others, made it so hot for Haight that the top brass decided to actually punish the general and retire him at the last grade he "satisfactorily" served in Army Secretary Eric Fanning did the right thing and actually demoted Haight, who was Director of Operations for the U.S. European Command before being reassigned to CONUS. His main squeeze has been identified as Jennifer Armstrong. No word on whether she faces any discipline at all. Right.


The Haight scandal is the latest sex-related mess Army flag officers have gotten themselves into this year. Former LT GEN Ron Lewis, National Guard BRIG GEN Michael Bobeck, and now-relieved 1st Infantry Division commander, MAJ GEN Wayne Grigsby (see Related Stories Box below), have all stepped on their dick in one way or another. You can be sure they won't be the last to do so.