Arlington Cemetery Now Has Wreaths for All Graves — Thanks to Generous Donors: ‘We’re One Country’

People.com reports, Christmas arrived just in time this year for the group that lays holiday wreaths on headstones at Arlington National Cemetery.  As PEOPLE highlighted less than two weeks ago, the nonprofit Wreaths Across America did not have enough wreaths to cover nearly one-fourth of the 245,000 final resting places at Arlington.

By Saturday, though, generous donors — including Cub Scout packs, Girl Scout troops, high school football teams and a 4-H Club — rallied to make sure all of Arlington was covered for the annual Wreaths Across America Day.

“To know that no veteran will go without being honored and remembered at Arlington again this year, prevents a family member who comes to visit their loved one from asking, ‘What about my son?’ when they see no wreath,” says Wayne Hanson, the group’s chairman of the board. 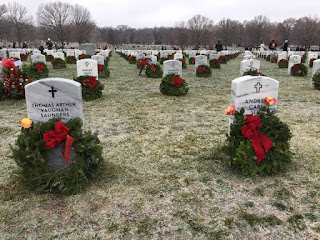 More than 44,000 volunteers turned up despite wintry conditions to lay the wreaths.

“To see all these people come together, from all walks of life, with different opinions and politics and religions, in the cold and freezing rain, to join us here and across the country to say thank you to our veterans, proves we aren’t all that different,” says Karen Worcester, the group’s executive director. “We’re all grateful Americans.”

The day brought a range of emotions to those who took part.

“I came out here so I can spend a little bit of Christmas with my guys,” Army Sergeant Chad Longell tells PEOPLE. “They can’t spend Christmas with their families, so I came here. I spent Christmas with them when we were deployed. To put a wreath on their graves meant so much to me.”

Last weekend was the first time Longell saw the grave of his friend Tom Saunders, who was one of 11 service members who died in March 2015 in a helicopter crash near Eglin Air Force Base in Florida.

“The last time I was this close to him was in Afghanistan,” he says.

While laying the wreaths, Longell met some of his fallen friends’ wives, children and parents.

The wreath-laying held meaning for those who have not personally served as well.

“It is so important to tell the volunteers to say the name on the grave when they place the wreath to honor and remember those laid there,” Sehring says.

“It goes to show how deeply patriotic this country is,” Longell says. “We’re one country here, remembering those who gave everything so that we can have everything.  That’s why I come out here.”

Food for thought:  This is a wonderful and heartfelt article written by my dear friend Susan Katz Keating and I'm proud that Chad shared his story and devotion to his fallen comrades.   Several years ago I had the pleasure of meeting Susan and Chad and their devotion and continued service to our country defines true Patriotism!!
Posted by Syneeda at 5:52 PM