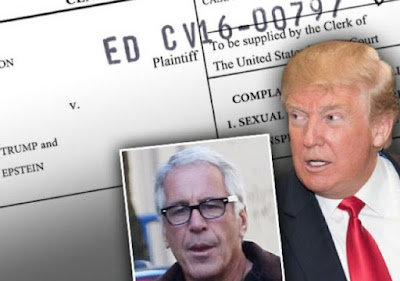 "A woman’s lawsuit alleging Donald Trump raped her when she was 13 will soon get a hearing before a judge — but not until after the presidential election.

Abrams has asked lawyers for the woman and Trump meet to discuss why the case should be held in New York.

They will also discuss whether both sides have talked about a settlement as well as a possible trial length.

The woman has alleged the GOP presidential candidate and billionaire perv Jeffrey Epstein assaulted her at a series of sex parties that Epstein threw in 1994.

Trump has previously slammed the allegations, calling them "categorically false" and "disgusting."

And while Epstein is accused of preying on scores of underage girls from the late 1990s to early 2000s, he has also denied her accusations.

Epstein did plead guilty to soliciting a minor in 2008.

The woman’s original lawsuit, which she filed without a lawyer, was tossed by a judge in California last May.

Her new lawyer, Thomas Meagher, has said the dismissal was because she cited laws that didn’t apply to the case.

Alan Garten, general counsel for Trump, doubled down on his position that the lawsuit is flimsy — and politically motivated.

“These are allegations that are completely unfounded but are alleged to have occurred more than 20 years ago by someone who refuses to give their name,” Garten told the Daily News.

“It is wholly without merit. It is a completely manufactured claim. The entire thing is a hoax designed to discredit my client and interfere with the election.”

Food for thought:
Donald Trump has openly admitted his “magnetic” attraction to women; he’s publicly expressed his thoughts about women, and he owned the Miss USA pageant for almost 20 years, from 1996-2015,” which says a lot about his character and sentiments towards women.  I view him as one of the most contemptible men on the face of this planet!!

You don’t have to be an opposing political candidate to see how Donald Trump and the Republican Party feel about women, just look at our current political structure, current laws, male dominant workforce and extreme sexualization of women!!

Yet Hillary has set women on a backwards course in this country while trying to prove that she's the most qualified person to lead us out of the current strife we're in. By employing her surrogates to incite hate and bullying towards men while playing the “gender card" takes Neo-Feminism to new heights!!

While working alongside men during my 20-year Navy career, as a black woman in what I consider to be the most racists of all branches of our four Armed Forces, I quickly learned to “get along” to get the job done! Not bully men and play the “Woe is me" card and cheat my way to the top!!

When I was "targeted" to be prosecuted as a whistleblower, for an alleged "sex-crime," it was a minority female JAG officer who played a key role in orchestrating bringing charges against me because of her hate, jealousy and envy towards me, stemming from such insecurity that she loathed the sight of her own body.  Talk about "locker-room talk..."  The conversations I overheard in the locker room between her and her BFF explains why she exploited private pictures of me, in hopes to eliminate her competition.  She even testified under oath that she had a "personal interest" in the outcome of my case because she was up for a promotion opportunity to full commander. My whistleblower complaints had caused her record to be flagged before the commander's promotion board and she knew pending legal actions would discredit me and ultimately ruin my Naval career.  Reminds me of our current political culture, how cut throat they can be.   I digress…..

This election season has brought out the worse in our country and has placed America under an international spotlight.  For decades we have allowed Hate, Bigotry, Greed and Power to hinder us from establishing better foreign relations to foster in Global Peace, to set the course for Love, Peace and Harmony.  America's Karma will be her ultimate downfall!!
Posted by Syneeda at 12:43 AM