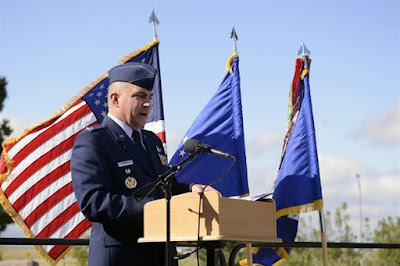 Col. Marc Caughey speaking on Sept. 11, 2014, at the Schriever Air Force Base in Colorado.

The Denver Post reports, "A colonel assigned to Schriever Air Force Base and under investigation of committing several sex offenses was found dead early Sunday at his Colorado Springs home.

Air Force Col. Eugene Marcus Caughey, 46, was due to face a court-martial on Oct. 17 for multiple charges, including sexual offenses, adultery and conduct unbecoming an officer and gentleman.

The military announced his death on Monday.

Caughey was assigned as an Air Force Space Command special staff member and had been in the Air Force since 1993, according to an Air Force news release.

Caughey was a former 50th Space Wing vice commander at Schriever, just east of Colorado Springs, before he was removed from his position on June 17, 2015, when the investigation into his alleged misconduct began.

The Air Force says his exact cause of death is under investigation by the Colorado Springs Police Department. Officials did not elaborate.

Colorado Springs police say they are still investigating the case. They were called to Caughey’s home on reports of a suicide, but that his official cause of death is pending an autopsy.

The Associated Press reports Caughey’s civilian attorney, Ryan Coward, said the commander was looking forward to his day in court and had been participating in his defense.

“I think this surprised everybody,” Coward said, according to the AP, adding that his client had served honorably for 20 years. “This is just a very tragic event that occurred for him and his family.”

“I was a captain inside the Pentagon that morning when a plane crashed into the west side of the building,” Caughey was quoted as saying."

I’m not aware of the circumstances that led to the colonel taking his own life?  My deepest condolences to his family and loved ones.  May he RIP!!

When I faced a military court-martial in May 2008, I felt that my life was coming to an end. Similar to Col. Caughey, I was charged with adultery, mis-use of government property and conduct unbecoming an officer and gentleman, which carried a maximum 16-year prison sentence.

For several years, before and after my trial, I was tormented and retaliated against by the Navy’s prosecuting officials.  Early on in my case, I was immediately fired from my job for refusing to allow them to “punish me,” for challenging their abuse of authority, misappropriation of war-funds and violation of my Civil Rights and subsequently, I endured egregious Human Rights abuse.   By the time I got to trial, I was gagged by the Judge and was not allowed to testify!!!

Although I was a member of a protected class, Military officials DID NOT recognize Civil Rights Laws that govern treatment (and protection) of minorities (women) serving in our Armed Forces.

In my memoir, Broken Silence, a Military Whistleblower’s Fight for Justice, I highlight key details of their blatant Abuse of Authority, which led me to reach out to Navy and DoD Inspector General officials, the FBI and the Department of Justice Anti-Trust Division, seeking better "whistleblower-protection."  Unfortunately, my whistleblower claims, including thousands of pages of incriminating evidence I’d provided to each of the investigating officials were later used against me.

After surviving the military's gauntlet, I've had to take my case public because in my view, there is NO JUSTICE in the Military’s in-Justice System!!

I suspect foul play, because he was ready to defend hisself. He maybe was gonna exspose some coverup. for example, rumor has it, from reliable conspiracy theorist, that there was no plane that hit the pentagon on sept 11 but a missle. Or maybe the weight of inevitable military guilty ruling was just to much to bear.

Anon, When the authorities conceal the cause of death, it usually means foul play. Yet, imagine if all the military personnel (especially senior officers) who commit adultery and sexual harassment/assault were prosecuted, the Pentagon would have to build more prisons!!

Anon, When the authorities conceal the cause of death, it usually means foul play. Yet, imagine if all the military personnel (especially senior officers) who commit adultery and sexual harassment/assault were prosecuted, the Pentagon would have to build more prisons!!