Two Generals are in Trouble.... Brigadier General Michael Bobeck, "Busted for alleged adultery and misuse of Gov't resources," and Major General Wayne Grigsby, "Steps down while investigations are underway." 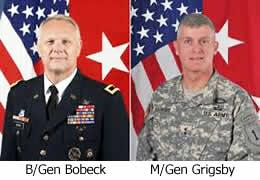 In a rare occurrence, two Army generals are in trouble at the same time. B/GEN Michael Bobeck, a National Guard flag officer, has been fired for alleged adultery and misuse of government resources. Two-star General Wayne Grigsby, the youthful-looking commander of the Fort Riley-based 1st Infantry Division, has been suspended from his high-profile position.

We have very little INTEL at press time as to why Grigsby is under investigation and obviously in some difficulty. All our Army CI's, especially those in place at Fort Riley, are urged to contact us as soon as possible with whatever you can find out. Thank you. Your identity will, of course, be protected.

The Army is being very tight-lipped on Grigsby. Usually, we can dig up at least some dirt despite the paucity of details from the public affairs office. But in this general's travail, the powers-that-be have kept on a tight lid. It has to be pretty serious for them to even announce that he's been suspended from his command, but there is no indication as of now, if the problem is sex-related or otherwise.

TAKING FAVORS FROM A HIGH-POWER LOBBYIST

Bobeck's case is much more clear-cut. He's been fired from his position as National Guard representative to the Joint Chiefs of Staff and may be putting in his retirement papers soon. We hear he might go out the door at a lower rank. Time will tell on that.

We do know that the one-star raised eyebrows when he moved into an all-expenses paid apartment thanks to his longtime lobbyist buddy, Joe Ferreira. He's a high-power guy at Peduzzi Associates Ltd. of Alexandria, Va.- an outfit representing Sikorsky, a division of Lockheed Martin.. The general is, or we should say was, a big-shot with Army aviation.

Bobeck spent three years, between 2010 and 2013, as chief of Army National Guard Aviation for the Guard Bureau. Then, until 2015, the B.G. was director for aviation transportation and the right "go-to" person to know to get help securing government contracts,"The general maintains he was in no position to award government contracts," Bobeck's attorney says. But was he able in any way to influence who got the biggest slice of the Pentagon money pie? Where there's smoke, there is often fire, folks, Stay tuned. More to come.

My thoughts:
This article certainly offers Truth, in that "Rank, Race and Military Position," certainly has its privileges.

When I came across this article, I said to myself, "Here we go again!"  Another military adultery case, involving a high ranking senior officer, misusing government resources to carry on his "alleged" affair, meanwhile, like the rest, he'll likely be allowed to retire unpunished, receive his pension benefits and due to his years of military training and experience, he'll also land a cushy post retirement consultant position with a top defense contractor, like the rest of his Good old Boys.

Meanwhile, the Navy's Board for Correction of Naval Records has yet to make a final decision on my retirement pension; this is months following the US District Court's ruling on my Civil Action case against the Secretary of the Navy Ray Mabus, which cited Whistleblower Retaliation; thus providing legal precedence for thousands of other veterans to come forward, who endured Civil and Human Rights violations as a result of their superior’s failure to uphold their Civil Rights protection.

One thing that I've learned during my “Long Fight for Justice,” is that, it may not come right away but when it does, the evidence is irrefutable!!

When I first went public about Military Fraud and its ongoing Sex Scandals, I wasn't aware of the Military’s Sexual Assault and Rape Epidemic, independent of Sexual and Racial Discrimination and Sexual Harassment.  Unfortunately, such behavior is being mimicked throughout our country, especially on college campuses and will soon make its way into our civilian workplaces!!

Not to bring politics into this discussion but after last's night Presidential debate, I'm proud of Hillary Clinton, for once, she was able to remind us, WOMEN (including transgenders - those considering making the full transition), what to expect should Donald Trump get elected. He has a lot of supporters and followers who idolize him and he's ideologies will soon rub off on them.

At a time like this, I would rather lobby against politicians like Donald Trump than support him.

Meanwhile, my message to all “Fathers and Mothers” is to Protect your Children and Lobby AGAINST the potential Draft Bill, demanding that our young women register at the age of 18!

Until there are Human Rights laws in place, serving as an Umbrella for Human Rights Protection throughout this country, our young girls should not be forced to serve in harm’s way, independent of the combat warzone!!  The beginning of the Iraqi war provided enough evidence and statistics of the number of female personnel who were raped and murdered. So far, the worse unsolved criminal case is PFC Lavena Johnson.  May she R.I.P.

Syneeda, What the Navy put you through is no different than what average black people face day in and day out. America has not changed for black people and you were punished because of your Race, Gender and because you were messing with their money!!
You are right, this article is indeed a true depiction of your case and it allows the world to see how this is the NORM for the While Good Old Boys club. They will never be punished and your case will be kept under the rug. I don’t know why you stopped promoting your story?
The military has a long history of the “Good old Boy’s Club” and women like you are not welcomed! It’s even more foolish that Hillary Clinton believes that she will also be welcomed at the table. Not in her lifetime!!

Anon, It's amazing all that I see throughout America, now that I'm retired. One thing for sure, it's all being orchestrated from within. It's the only way to keep certain groups under “control,” be it African Americans, Native American Indians, Latinos, Women, as well as members of the LBGT community. Each one of these groups have proudly served our military and yet statistics will show, each one have experienced some form of Civil and/or Human Rights abuse while serving in the US Armed Forces, yet their White counterparts often get a free pass, which is precisely what I experienced. And will likely be the case with these guys, and hundreds of others like them!!

Like all interesting stories, my story has a beginning, yet the media prefers to always report the “sexy” aftermath. Sex certainly sells in the country but Truth often remains silent.

While serving on active duty, I always respected the Navy’s rules and regulations, which is why I later became a targeted whistleblower, I always held white officers accountable for their actions… Yet those who swore an oath to uphold the Constitution, as well as the regulations that proceeded, always see fit to make up their own rules as they go along, and this is a clear example of bending the rules to serve one’s ego!!

Serving 20 years in one of America's most racist organizations allowed me to see how dishonest our senior military officials truly are. I experienced and witnessed it from day one, while serving as a junior enlisted sailor. Yet, unlike the two young Sailors who recently dishonored the American flag, I did not rebel; instead I decided to become an officer, in hopes to reach back and help those who needed better guidance and mentoring. Unfortunately, crossing over into the majority “White” officer ranks was the worse decision of my life, because those are years I can never get back.

The only positive thing that came from my officer service is being able to see how the Good old Boys really operate, whether they are cheating on their wives!! Cheating the federal government and tax payers!! Or cheating America!! They’ve been in bed with the private defense industry for centuries. Neither President Lincoln nor President Johnson could control them!! They simply warned us of the vast Military Industrial Complex.

I've worked with guys like Maj Grisby throughout my career as a budget officer. During my assignment in Korea, this seemed to the norm. Even my late friend, Major Gloria Davis was caught up in this type of behavior. May she R.I.P.

Look at how long the Navy's Fat Leonard scandal was going one, reportedly for over 20 years, which I believe was longer, especially in the Pacific Region!!