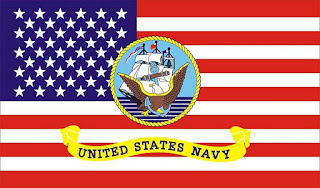 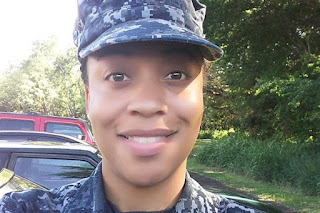 Military.com reports, “Intelligence Specialist 2nd Class Janaye Ervin, a reservist on active duty within U.S. Pacific Fleet, is subject to administrative actions, still under review, for refusing to stand for the national anthem while in uniform Sept. 19.

Ervin posted a public account of her actions to Facebook on Sept. 21.
"I have been proudly serving in the US Navy Reserve Force since November 2008. I have pledged to support and defend the Constitution of the United States and to spread freedom and democracy around the world. I will never waver from that pledge," she wrote in the post, which included a photograph of herself in her Navy blue digital camouflage work uniform.

Her choice not to stand for the anthem was a conscious decision, made for ideological reasons, she said.
"I feel like a hypocrite singing about the 'land of the free' when I know that only applies to some Americans," she wrote. "I will gladly stand again, when ALL AMERICANS are afforded the same freedom."
According to activist and New York Daily News reporter Shaun King, who publicized Ervin's case on Twitter along with a Change.org petition supporting her, Ervin said she lost her security clearance and was threatened with jail by the Navy in response to her actions.
Full article: http://www.military.com/daily-news/2016/09/23/second-sailor-under-review-for-refusing-to-stand-for-anthem.html
My thoughts…
When are Black Americans going to Evolve past the Slave Syndrome and take personal responsibility for the actions of others within their communities, as well as take legal action against those who are in clear violation of the Constitution, be it, police officers or hold our Black Congressional members accountable?!! Vote their asses out of office!!!
But I guess it's hard to evolve past it (the Slave Syndrome) if it's constantly being broadcasted in your face by members of the entertainment community!!!
That's why I cancelled my cable subscription years ago and I can't remember the last time I watched a Black Slave movie. Yet, nearly every appearance Michelle Obama makes or speech she gives, she's paid to reinforce the Slave Syndrome!!!  While Black Americans worship her and her husband??!!!
Riddle me this, "What have Black politicians done for the Black Community lately?!" besides getting behind a microphone in protest?! What about passing laws to uphold the Human Rights of All American citizens!!! Considering America's Black President was a legal professor who taught Constitutional Law!! I digress...
Considering my personal Fight for Justice and ongoing legal battle with the Navy, I find it disgraceful to see young military personnel violating military regulations by jumping onboard such a sensitive social issue and asking for public support in defense of their actions!! Lucky for me, when I decided to challenge the fraudulent actions of my superiors, I had senior mentors and legal advocates who guided me through the now, 9-year process, ensuring I did not violate regulations that would get me in trouble, despite their unlawful retaliation against me for attempting to exercise my "Civil Rights?!" Similar to disobeying the unlawful actions of police officers; go along with their unlawful actions, while praying for Spiritual protection of course, and fight them later in the court of law!!
Instead of flooding the streets in protest, flood the court system in protest!!! Demanding Human Rights Protection!!
For the record, I never followed behind jocks in her high school because I've never been a follower!!
Lastly, if you are brave enough to stand in protest for the very thing you are PAID to represent, you should be brave enough to accept the consequences of your actions!!!
Posted by Syneeda at 12:20 AM