Colin Kaepernick Stands for Human Rights, and So Should You!! 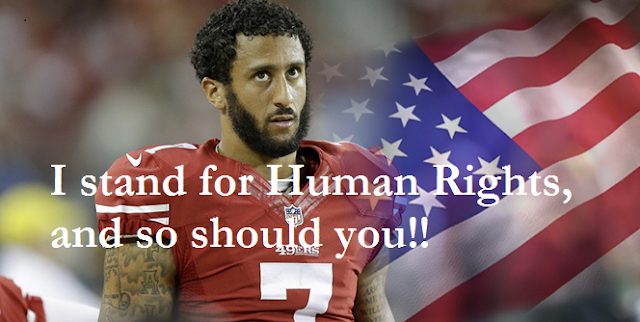 After watching the recent press conference by Colin Kaepernick,  it finally allowed me to see the true nature of Colin's compassion for helping others.

As a military veteran, I experienced my own injustices, involving Civil and subsequent Human Rights abuse when I last served in the Navy.  Last year I published a memoir about my experience, “Broken Silence, a Military Whistleblower’s Fight for Justice,” and I now advocate against Human Rights Abuse, of any kind, especially against our military veterans.

I, like Colin, stand on the side of righteousness!!  And I believe in helping those who cannot help themselves and I applaud Colin’s bravery for standing up, or should I say, sitting down, for what he views as “Issues” that need to be addressed.

I’m not a football fan and couldn’t tell you who’s who in any sport for that matter but I am a Navy veteran who initially took offense when the news feed about Colin popped up on my Facebook page.

Like most Americans, I was quick to misjudge Colin without knowing the reasons behind his actions, and this press conference gave me a lot of clarity.

Since I filed my Civil Action lawsuit against the Secretary of the Navy, Ray Mabus, I’ve been misunderstood but I had to report the actions of my former superiors who abused their authority and committed fraud against the government, in a pro se petition filed with the DC district court.

Similar to our military veteran’s rape and sexual assault cases, Civil and Human Rights abuse often land on deaf ears when Veterans file their grievances with their political representatives, as well as the United Nations.   Veteran’s suicide rates are skyrocketing and more and more veterans are being diagnosed with PTSD and are being overmedicated as a means to silence them or write them off as being “delusional,” as a means to protect the interest of corporations who use our military to secure their foreign interest.   Like our citizens, veterans are tired of being used like pawns, mistreated and some feel as if their only alternative is suicide.

As an advocate, I also consider myself a historian, you have to be in this field, to remind others of all the wrongs that need to be righted in this country.  I recall when I first decided to file my Civil Action case being advised by a Civil Rights attorney of the issues President Johnson faced before passing the Civil Rights act.  He was a Civil Rights attorney who defended black sailors and Marines in San Diego in the early 70s.  He said, “Sy, to effectively make change in this country, you have to successfully argue your case in court, which was the same ideology shared by Thurgood Marshall.

Since President Obama’s terms in office, America has loss one of her most promising Civil Rights attorneys that could’ve made a difference within the African American community and their ongoing social injustices.

The only way to effectively change someone’s behavior, to prevent our cops from violating the Civil Rights of American citizens, is to hold them accountable to a higher law.  The best solution is for President Obama to sign an executive order, like President Johnson, to grant all American citizens Human Rights protection.

As well as omitting the racists stanzas from the National Anthem.
Posted by Syneeda at 3:14 PM