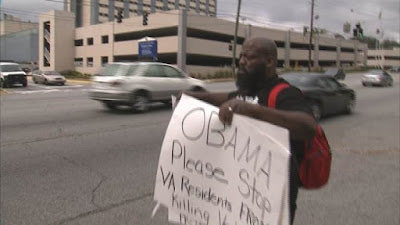 A local family is lashing out at the Atlanta VA Medical Center after they say the hospital botched a routine procedure and now their father is dying.

"I don't use those words lightly. It's sacred because there is no more solemn request than to ask someone to risk their life, to be ready to give their life on our behalf," Obama said at the annual convention of the Disabled American Veterans.

Quicker processing of disability claims and appeals is also needed. A staggering backlog of disability claims has been whittled from more than 600,000 three years ago to below 80,000, but some 450,000 appeals are pending. Veterans wait an average of three years for a decision, which the White House called "unacceptable." Obama called on Congress to pass legislation to overhaul the system."

This is personal for me, two of my relatives paid the ultimate sacrifice while receiving poor healthcare treatment at the Atlanta VA. 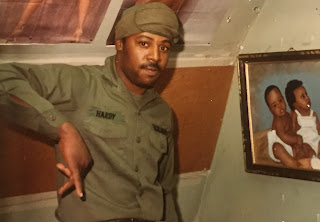 On August 13, 2015, my uncle passed away after a botched routine procedure at the Atlanta VA hospital, he was only 56 years young!!  My father, a Vietnam Vet, passed away in early 2011 from complications of COPD.  He was placed on an extended  waiting list for a follow-on appointment, which never happened, he died between appointments.  In the interim, he was never offered treatment medication for his symptoms.

The Atlanta VA is located in the 5th District, Congressman John Lewis' congressional district!!
Posted by Syneeda at 8:19 PM