"It looks like our tenured law professors are beginning to challenge "Adultery, Infidelity and the Law." 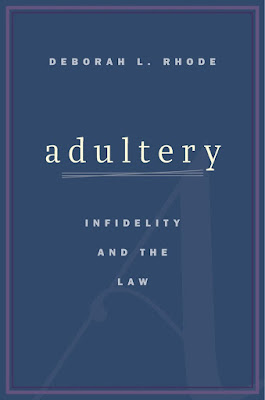 Popmatters.com recently reported, "In Adultery, Infidelity and the Law, Stanford law professor Deborah L. Rhode argues that the US should remove civil and criminal penalties for adultery. Rhode cites the infrequency and inconsistency with which current laws on the matter are enforced.
Moreover, she argues that these penalties are out of tune with current social values. She cites a “fundamental ambivalence” that is reflected in the presence of such laws. While society generally disapproves of marital infidelity, support for laws that enforce criminal penalties has decreased. She notes that many remained surprised by these laws, a matter that speaks, she writes, to the outmoded nature of such legal strictures. She adds, “Marriage as an instruction is worthy of public respect” while “criminalizing extramarital affairs is not the best way of supporting it.”

Food for thought:  I was truly surprised to learn that Professor Rhode cited my case in her new book, "Adultery, Infidelity and the Law," the timing of her book release was interesting...

Needless to say, this remains an issue in our military and so does "selective prosecution" of our military members (or lackthereof) who are married and commit adultery.     Every foreign port I've visited are lined with brothels and bars to accommodate our Servicemembers. Honestly to them, it's a major perk for military service.

Yet I still remain the only Single person to be prosecuted in such a manner and sentenced to serve time in prison and stripped of my pension for a crime I didn't commit!  Talk about double standards.   The rules needs to be standard across the board and I'm sure the married officers will be relieved when the laws change in their favor!!
Posted by Syneeda at 1:37 PM