Is Former First Lady, Hillary Rodham Clinton Above the Law?! 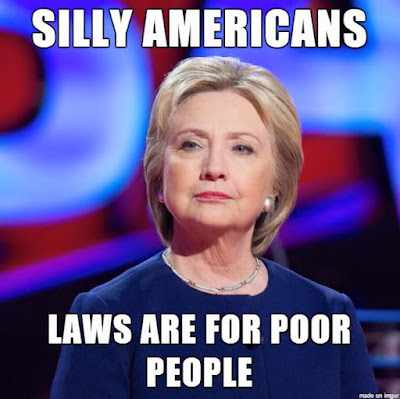 As far back as I can recall, I’ve never supported either side(s) of politics, the above image could be one of the reasons why!!  By the time I was old enough to vote, I was already serving our country in the military.  I voluntarily enlisted to serve in the US Navy when I was 18 and it was my contractual duty to, "Obey the orders of the Commander in Chief,” the US President.

As a former Mustang Supply Corps officer, I took pride in upholding my oath of office and carrying out my budget duties and fiscal responsibilities to American taxpayers, no matter who was serving as President.

I served on active duty during the first Clinton Administration and as a Naval officer, I remained loyal to former President Bill Clinton, as our Commander in Chief, despite the fact that he was found guilty of a number of sexual indiscretions.  Yet I’m extremely disappointed at the case against his wife Hillary.  America was looking forward to having its first female Commander in Chief.  But when you abuse your executive powers long before being appointed to serve at the helm of the World's Strongest Global Fighting Force, it begs the question of your true intent!?

Unable to answer the question of her “Intent” to commit a crime, during his "public interrogation" yesterday, FBI Director James Comey testified that, "Clinton’s email practices put America’s secrets at risk and her actions constituted the “definition of carelessness.”   Really?!!   Say it isn't so...

I'm not a Congressional official or member of the RNC or DNC but I think this should certainly be a “disqualifier” for holding the country's highest office as the Commander in Chief!!  I say this as an American Citizen!!

I usually avoid lending my time or energy to sitting glued to a TV screen, watching our country's Political Circus Act, but it was like my Spirit was drawn to watch Comey's testimony.

During his grueling interrogation, I noticed strange yet "interesting" remarks by key panel members, obviously Hillary's strongest supporters.   Members of the Congressional Black Caucus have always looked out for their best interest, especially in the Wake of ongoing civil unrest within the Black Lives Matter Community Movement.  Dr. King would be proud...

Last week, Congress passed legislation granting more Civil Rights Protection to  members of the LGBT Community, but it looks Blacks Lives will continue to stay on the back burner as far as passing legislation for Human Rights Protection, in my view, for of ALL American Citizens!!

Unfortunately, it's become the Way of American Politics since the 1960s Civil Rights Movement and 1970s Liberation Movement; suppressing the passage of critical legislation, "For the good of the people!!"  I digress...

When I was last served on active duty in the Navy, I was fired from my position as the command's budget officer and was later prosecuted, fined, sentenced to serve 60 days in prison and discharged without my pension benefits, for far less of a “crime.”

As a federal employee, I was merely a Navy Lt. Commander, not a Presidential Candidate, "Commander in Chief."  The Navy convicted me of committing “adultery” as a single person and former President Bill Clinton wasn't prosecuted in the same manner as I, after being found guilty of infidelity, along with hundreds of other senior military officers, "Charged with Rape, Sexual Assault and of course, Adultery!

But the shenanigans I saw during Comey's "interrogation" didn't surprise me. Key Representatives were obviously representing Hillary’s behalf when they “praised” the Director’s reputation?!! Yet what caught my attention is when the Live Feed was conveniently interrupted when the question was asked, "When was the Classified Server installed in the Clinton's home?"  When the Representative inquired whether it was installed while Bill was in office, the Live Feed was interrupted....

Enough with the Dog and Pony shows, Americans Lives Are at Stake!!!

Over the years, while fighting my case against the Navy, I’ve had my own dealings with the Justice Department.  The DoJ defended the Secretary of the Navy, Ray Mabus, in my Civil Action lawsuit against senior Navy officials, for committing crimes of "Racial and Sexual Discrimination and Human Rights Violations."

In 2011, Mr. Crawley informed me that he was "directed" by his superiors to drop the investigation," although he felt I’d provided enough evidence to move the case forward.

In light of the Navy's 20 year corruption scandal, in the DoJ's case against "Fat Leonard," like Hillary Clinton, senior Navy Admirals remain "untouchable!!"

Yet I must say, I’m extremely disappointed in America’s Justice System as a whole.  It appears that Black Americans are, and will always be, the underdog in American/European society, and the laws are simply used to “Keep us in our Place,” which is exactly how I was (mis)treated in the Navy, each time I spoke out about Injustice, from day one.

In my memoir, "Broken Silence, a Military Whistleblower's Fight for Justice," I walk the reader through my entire career, from enlisted to officer, highlighting the Civil Rights  and subsequent Human Rights violations I was forced to endure while rising through the ranks of our Armed Forces most racist organization, the Navy!

Look at the growing number of Veterans' claiming to have been mistreated while serving in the military, be it, “Rape, Sexual Assault, Sexual Harassment, Sexual Discrimination, Racial Discrimination, Disparate Treatment or Sexual Orientation Discrimination.  There are tens of thousands of medical compensation claims filed by Veterans, relating to "workplace related crimes," stemming from Civil Rights and Human Rights Violations, throughout all the military's Armed Forces.

Yet I beg the question, why are certain government officials treated one way, like they are above the law and are never prosecuted, and others like me are prosecuted like heinous criminals.  During my prison sentence at Miramar Consolidated prison, I lived amongst murders, rapists and sex offenders !! And my alleged "crime" was that I committed Adultery, as a Single person?!

During my trail, I was facing a 16 year prison sentence, charged with “Conduct Unbecoming an Officer.”    When the Pentagon finally responded to news inquiries about my case, they stated that I was prosecuted because I was the “Senior Officer” and was held to a much higher standard.

During my ongoing "Fight for Justice," I’ve followed dozens of “Rape, Sexual Assault, Sexual Harassment and of course, 'Adultery' cases," involving senior White Male Officers, none of them were charged with “Conduct Unbecoming an Officer” yet nearly all of them were never prosecuted, never faced prison time and were allowed to retire with their full pension intact.

After watching General David Petraeus’ public vindication, I was convinced that Rank and White Privilege certainly has its Privilege at key levels of our federal government!!

Yet, under former President Clinton's Administration, there was a change handed down to the Manual for Court Martials that dictated adultery cases be handled at the lowest possible level but was dropped due to an uproar by Congress. In 2002, President Bush adopted many of those same recommendations made by Clinton in a stealth maneuver and "In addition to the 'Elements of Proof' the Explanation section under this offense now requires commanders to consider several factors when determining whether or not the offense of adultery constitutes a crime."

I was recently notified by a Case Examiner for the Board for Correction of Naval Records (BCNR), a retired Commander and long time employee of the BCNR, that my case is being considered in accordance with the United States District Court for the District of Columbia court order as soon as a crowded docket will permit.

Meanwhile, the Secretary of the Navy, Ray Mabus, jumped on President Obama’s bandwagon to exonerate members of the LGBT community that were wrongfully discharged from the Navy for being gay, encouraging them to submit their application to the BCNR for a service upgrade and possible reinstatement, and possibly "grandfathered" pension benefits?

Wow, I filed my initial application over 4  years ago and the SECNAVINST 5420.193 gives specific guidelines on managing applications, especially those that are in litigation, pending Federal or Civil court decisions, and requires expeditious and special handling.

Yet, I’m still Fighting for Justice!!

I’ve been told by a number of Civil Rights Activists that my case is the perfect case to be examined by law school professors and legal advocates, and it was recently cited by Deborah L. Rhode in her ebook, “Adultery: Infidelity and the Law.”   Deborah serves as Ernest W. McFarland Professor of Law and Director, Center on the Legal Profession at Stanford Law School.  In her ebook, Deborah discusses, “Despite declining prohibitions on sexual relationships, Americans are nearly unanimous in condemning marital infidelity.  She explores why?  She exposes the harms that criminalizing adultery inflicts- including lawsuits, job termination, and loss of child custody-and makes a case for repealing laws against adultery and polygamy.”
Posted by Syneeda at 11:00 PM

You certainly said a mouthful but I see where you are coming from. It is definitely a Power Struggle on Capitol Hill and Hillary wants to take the lead, or Bill. You never know with those two.