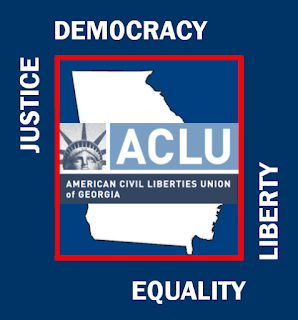 Thinkprogress.org reports, Conservatives are clamoring to highlight the the story of Maya Dillard Smith, the Interim Director of the ACLU’s Georgia chapter who quit over her position on transgender issues. Under the guise of having “questions” about trans issues, Smith has fully embraced a new public role as an advocate against transgender equality.
The crux of Smith’s objections to the ACLU’s transgender-inclusive positions is an experience she claims she had with her two youngest daughters in a bathroom back in California before making the move:

I have shared my personal experience of having taken my elementary school age daughters into a women’s restroom when shortly after three transgender young adults, over six feet [tall] with deep voices, entered. My children were visibly frightened, concerned about their safety and left asking lots of questions for which I, like many parents, was ill-prepared to answer.

If Smith sincerely just didn’t know enough about transgender people to answer her daughters’ questions, that’s one thing. But she has indicated that she herself was uncomfortable and concerned for her family’s safety, and she has since used the idea of asking such questions to reinforce anti-trans talking points. In fact, she seems to be embracing a new public persona as an anti-trans pundit.
In an interview with Fox News’ Megyn Kelly last Thursday, Smith explained, “Since my arrival at the ACLU, I have been actively seeking out information and asking questions as simple as, ‘As there is an effort to advance transgender rights, what are the implications on the rights of transgender women and girls? What are the implications on the rights of parents?'”

One particular documentary I think all Civil and Human Rights Advocates should watch is, "The Christine Jorgensen Story."  It's one of the best documentaries that highlights the early life's struggles of George Jorgensen's transformation into becoming a "Transgender Woman."   Long before Bruce Jenner's transformation!!


Several years ago, I came across this movie a few weeks before my niece confided in me, to let me that she's gay.  I wasn't shocked by her revelation because she was "labeled" as a Tom Boy, I was more shocked by how she'd already decided she was sexually interested in girls.  Being 14 and all.

Being receptive of her life's choices, knowing who "She is," I've learned so much from my niece because I took the time to listen to her feelings which forced me to educate myself on LGBT issues.  I was even her advocate when she decided to tell my mom and her mother (my sister).  I will never forget my mother's initial response, which was, "Why would you want to crawl into something you crawled out of?!"

As a child and more so as an adult, I've never challenged or disrespected my mother's guidance but I empathized with my niece.  She wanted to wait until her 18th birthday to share the news with my mom and her mother because she was being bullied in school for being "different."

I understood the importance of letting her "Be herself" and I think the Universe guided me to watch the Christine Jorgenson's story to express to my mom what her life would be like should we ignore "Her decision."   I simply asked my mom, would you love her less if she was gay?  After processing the news, a few seconds later my mom said, No!  We rejoiced in tears of silence and my niece walked up to me and hugged me for being the voice of reason!

What I learned from the experience is that, "Sometimes all it takes is a conversation with our young children and a lot of love, compassion and guidance!!"

Since I've been out of the Navy, nothing shocks me anymore about this country's social and moral value system, especially when it comes to Sex, Sexual Orientation and Gender Identification.  I still have friends who are in disbelief that I was prosecuted and sentenced to serve time in prison as a Single Person, on charges of committing adultery.  Of course these friends are members of several Swinging Clubs in the local Atlanta area.  I failed to mention they are married... Again, WoW!

After seeing a recent interview on The View, about Mrs. Dillard Smith's position on Transgender issues, I was shocked that she was even hired by the ACLU, given her professional background.  Leaving her  "prestigious" position in California to relocate to Atlanta to work for the ACLU, of all organizations. Especially in a city that is highly populated with gays, besides Washington DC and San Francisco.  It seems odd to me...

As a Georgia native, I've met so many "transplants" from larger cities, all jumping on the Civil Rights bandwagon and trying to make a name for themselves.  With all her education, she obviously still has a long ways to go as it relates to Gay Issues.  Yet I highly recommend she watch the Christine Jorgensen Story, it might enlightened her.  I think it's rated PG so her daughters can watch it as was well.

We've been down this road before and there is no reason to fight against Equal Rights for ALL, isn't that what Public Policy is all about, Mrs. Dillard Smith?!

As far as the solution for transgender restrooms, the below image certainly gives us a start in the right direction.  You can find examples of these particular "One Stall" restrooms in public places like hospitals, which is where I took this picture.

Again, there is no need to reinvent the wheel.  As an Advocate for Human Rights, I take a neutral stance on public interest issues, because it's our job to guide others to neutral ground, to progress issues forward, not backwards!!