Japan's Okinawa rallies against US military base, tens of thousands of protesters express frustrations with US presence on island after a former soldier allegedly raped and killed a woman. 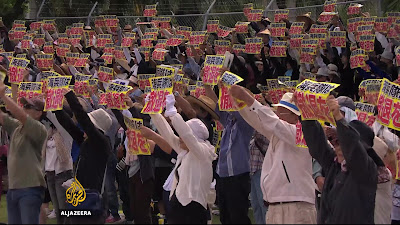 Aljazeera.com reports, Tens of thousands of demonstrators have rallied on the Japanese island of Okinawa, protesting against the heavy US military presence and violent crimes by American personnel there.

Gathered on Sunday afternoon, protesters expressed their frustrations with the US after a former member of the Marine Corps employed as a civilian base worker allegedly raped and murdered a 20-year-old local woman in April.

The case has intensified long-standing opposition to the military bases, a key part of the US-Japan security alliance, on the island popular with tourists.

Al Jazeera's Rob McBride, reporting from Okinawa, said the US has been acting in a sensitive manner to the current mood on the island.

"Washington quickly announced a one-month period of mourning on all their bases following the killing of the young woman," he said.

"The US insists this death should not drive a wedge between them and the people of Okinawa. But many here believe there will always be tensions while US forces remain."

The rally also called for the scrapping of plans by Washington and Tokyo to move a major US Marine facility in the centre of the island to pristine waters off the northern coast.

Okinawa's governor, Takeshi Onaga, who was expected to attend the rally, opposes the plan and instead wants Marine Corps Air Station Futenma, which sits in the middle of a crowded city, to be moved off the island altogether.

He has revoked approval for work on the facility, in a setback to the plan, despite the fact that Washington and Tokyo vow to push forward.

Roots of US presence The roots of the presence goes back to the end of World War II when Okinawa was the site of a battle between Japan and the US, followed by a 27-year US occupation.

In 1995, tens of thousands rallied following the rape by three American personnel of a 12-year-old girl. The protests prompted Washington to pledge to reduce the US footprint on the fortified island.

Nearly 100,000 people joined a protest in 2010 against the construction of the new base off the northern coast.

US officials have grown increasingly concerned that the behaviour of its troops on the island could jeopardise support among Japanese for the security relationship.

Washington have imposed restrictions including on off-base alcohol consumption after an intoxicated sailor injured two locals while driving this month.

Unfortunately, the US military is the largest terrorist organizations in the world. They invade countries, after provoking them with their western beliefs, corporate greed and corruption.

During their hostile takeover, military servicemen are allowed to rape the native women and children while murdering their men. This has always been their Art of War, enjoying the spoils of the kill. They are beyond sick!! Yet the American military wants to be the world's police but they are the ones who needs policing.

I don't know why Americans are not protesting like the Japanese on the steps of the White House, to demand that President Obama address these human rights issues. Considering the larger number of military veterans who have testified before his Congress that they were raped by their fellow servicemen, and women.

Female on female rape and sexual assault is one of the military's best kept secrets, a lot of their perpetrators are deployed to S. Korea until the dust settles at home. These are tough women and the military don't want to get rid of them.

There are dozens of archived news reports that covered young female recruits being raped in the barracks at Fort Hood. No different than the serial rapists at the Marines barracks at Quantico, VA.

You points are valid yet I feel that our Congress creates more problems for our country than they get paid to fix.

I witnessed the same corrupt practices in the Navy, when the Pentagon is given too much money and too much power; things have a way of getting out of control.

Instead of looking in the mirror at our own morally corrupted value systems, the US has developed a reputation as being the World Police. Imposes its corrupted Western beliefs on defenseless countries, while pilfering their natural resources and attacking their religious beliefs. I think this is a clear example of Terrorism!! America was first incorporated by appeasing the Evil desires of Greedy-Power Hungry Europeans?!! I digress…

As a Veteran, reflecting on my military experience, I'm embarrassed to have ever been a part of such an organization that not only morally rape our young men and women, in this case and thousands of other cases, they also physically rape them. Due to the lack of Congressional Oversight over the military!!