Corruption at the Core of the US Navy 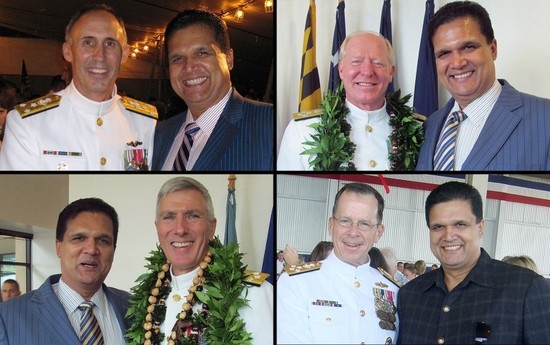 Fat Leonard, seduced, bribed and basically “Pimped” senior Navy Officers for over 20 years and the web of corruption is rooted to the very core of the Pentagon!

Just when I thought I did a thorough job uncovering systemic financial mismanagement, sole source bid rigging and illegal revolving door practices at the Navy's Expeditionary Combat Command, this case is certainly worth public attention as well as scrutiny on how the Pentagon conducts its “Illegal” business practices!!

Unfortunately for me, the Department of Justice never took my June 2009 False Claims Act petition seriously.  Weeks before I was ordered to be discharged, I filed the FCA petition with the DoJ’s Anti-Trust Division.  For over a year after my discharge, I worked closely with senior DoJ prosecutor, Shane Crawley, providing enough evidence to link my former bosses’ corruption scandal to contractors employed by defense contracting company, Logistic Support Inc., which is headquartered in Arlington Va.

The company's President and Chief Executive Officer (CEO) served over 22 years as a Navy Supply Corps Officer and his Veteran stocked owned logistics company is now a lucrative multi-billion dollar industry, as a result of a 2006 rigged ‘sole-sourced’ contract.  The evidence is clear in their "bid proposal package," along with examining the work history of the retired officers linked to this scandal.

In the later chapters of my memoir, “Broken Silence, a Military Whistleblower’s Fight for Justice,” I lay out explicit details on how a number of active duty officers, including my former bosses who ordered my prosecution for the specious adultery charges (and a number of retired officers) colluded together to rig a logistics support services contract to “Rehire” themselves and their buddies; while setting their own salaries, along with a slew of other criminal activity.

As you can see in relation to the Fat Leonard fraud scandal, it doesn’t take much to “Seduce” these criminals to commit crimes against the US government!!

LCDR Penland, I sincerely applaud your heroism!! The Navy needs more Supply Corps Officers like you!

You bravely put your career and life on the line when you challenged John Sturges and his buddies' corruption. I know John quite well, what a lavish lifestyle he and his “buddies” live in San Diego.

Kickbacks, cash bribes and a larger piece of the American Pie is what these guys are committed to. Their creed has always been, “One hand washes the other!”

Anon,
I haven't answered to LCDR Penland for quite some time, and I sincerely thank you for your support!!

Since my recent interview with Fox 5 News, I‘ve received tons of support view social media, and a few of my online supporters reached out to their Congressional Representatives on my behalf!  It’s always comforting to know that I’m not alone in this fight anymore.

Truth be told, my ‘Fight for Justice’ stopped being about the Navy robbing me of my hard-earned pension years ago. After being contacted by dozens of Veterans since I released my memoir, made me realized that I’m not the only Whistleblower that was reprised against after contacting DoD IG. Meanwhile, Veterans issues remain at the bottom of the White House priority list.

I’m willing to take my issue to the Supreme Court if necessary, to ensure Pentagon officials are held to a much higher moral standard, be it, Civil or Human Rights violations. There is no current law on the books to protect Veterans’ from human rights abuse while serving on active duty, and the Feres Doctrine is so outdated yet it remains the sole statute argued by Justice Department advocates to shy Civilian attorneys away from wanting to defend our issues.

It's not easy challenging the Justice System(s) in this country, especially the Military’s “In-Justice” System. I pray that my Fight will soon be over and I can proudly say, “I didn't give up without a good fight!”

The late Muhammad Ali once said, “Only a man (or woman) knows what it is like to be defeated can reach down to the bottom of his (her) soul and come up with the extra ounce of POWER it takes to WIN when the MATCH is EVEN! For the past 9 years I’ve lived those words and I have the POWER of the Universe on my side!

I fought sexism and racial inequality throughout my career, but when I became an officer it was like I was being deliberately set-up for failure, like the majority of minority female officers in the Navy. Just take a look at our quotas, or lack thereof. But when you are a part of a much larger cliché, “One hand certainly does wash the other.”

Here are links to the interview and I hope it goes viral!!