All's Fair in Love and War, as Army investigates Racism Within West Point 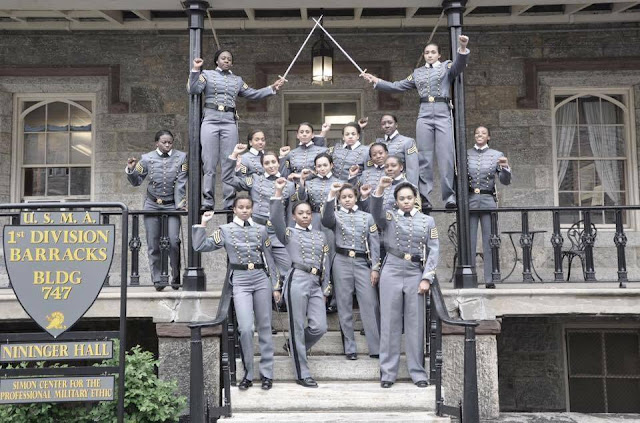 After reading several articles about this image, without knowing all the facts surrounding such a BOLD display of “Strength, Pride, Courage and Sisterhood” from these young ladies, makes me wonder, "What led them to form such a “Formation?”

“Was it inspired by Beyonce’, the Black Lives Matter Movement, or battling years of Racism in one of the military's elite training institution?!”

According to Soldier of Steel who kicked this discussion into motion for several social media outlets and bloggers to chime in on “Racism in the Military,” I say, “Why not ask those of us who survived the gauntlet of systemic “Racial, Sexual and Gender” inequality while serving alongside our white male counterparts, “The need to form together to get our points across and voices heard, in opposition of racism, rape, sexual assault, disparate treatment and other forms of unlawful treatment while serving our county."

When I first joined the military, the Navy was conducting pilot programs for integration of Women at Sea.   For those of us that were lucky enough to survive workplace abuse, we remained guarded against bullying and disparate treatment throughout our careers.  My case along with thousands of other victims of workplace abuse merely highlights the need for military reform, which is long overdue!

These young ladies enrolled at West Point during one of America’s most crucial junctures of social injustice during our lifetime, kicking off the Black Lives Matter Movement, following a series of young African American men being murdered in the street.  Let's not forget that!!  I’m sure it’s been difficult for both black and white cadets to watch such an “Up Rise” of social unrest while training to become America’s future defense leaders.  Yet this opens the door to finally discuss Racism and all other forms of Military injustices.  As I stated in my previous blog post, this is a matter for President Obama to weigh-in before leaving office.  How can he continue to live with himself as the Commander in Chief while allowing senior Pentagon officials to blatantly abuse its junior personnel?!

Racism in the Military is rampant throughout ALL the Armed Forces and our Boys are taught to “Cover-Up” for one another, just look at how many have gotten away with rape, sexual assault and in the case of PFC LaVena Johnson, "Murder!!"  And let's not forget my case, “Adultery and Fraud” which forces me to beg the question, “Are these the types of leaders you want protecting over your sons and daughters, both domestic and abroad?!”

Lastly, “Do I support such a display of sisterhood while in uniform, I say, “If you stick to the regulations in all circumstances, you can never go wrong!”  But as proven with the outcome of my recent Civil Action lawsuit against Secretary of the Navy, Ray Mabus, “Regulations are always left up to one’s “Mis-Interpretation” which was the Navy’s excuse for violating my Civil and Human Rights as a Military Whistleblower.