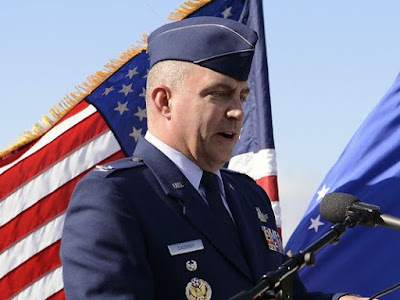 Air Force Times reports -- The former vice commander of the 50th Space Wing, charged with rape, assault, adultery and other lewd acts, will head to a general court-martial in August, according to the 21st Space Wing at Peterson Air Force Base, Colorado.

Col. Eugene Marcus Caughey, currently assigned to Air Force Space Command at Peterson, was charged Dec.10 with rape and assault at Schriever Air Force Base, Colorado, after in late 2014 or early 2015 he allegedly used “unlawful force” to hold the victim “against the wall and floor” while committing a sexual act, charge sheet documents reveal. He was also charged with various acts of alleged misconduct — which includes taking photos of his genitals while in uniform — dating back to 2013, according to his charge sheet.

The general court-martial convening authority Lt. Gen. David Buck "decided to refer the case to a general court-martial," base spokesman Stephen Brady told Air Force Times on Tuesday. A motion hearing will take place before the trial, and is scheduled for June 27, Brady said.

Caughey, a 23-year Air Force veteran, allegedly committed six counts of adultery between 2013 and 2015, in violation of Article 134 of the Uniform Code of Military Justice. One charge with two specifications in violation of Article 133 of the UCMJ, conduct unbecoming of an officer and gentleman, states that Caughey took a photo of his genitals while in uniform in his office.

Caughey has been charged with unlawfully groping women on two other occasions, according to court documents.

Caughey, formerly second in charge of the 50th Space Wing at Schriever, is a survivor of the Sept. 11 terror attack on the Pentagon, according to a Schriever release. The 50th Space Wing oversees navigation and communication satellites.

Food for thought:  The Chickens are finally coming home to roost and it’s high time the Pentagon begin prosecuting all the rapists and adulterers throughout the military.  These bastards have gotten away with bullying, assaulting, raping and murdering their fellow colleagues for far too long!

Honestly, I think it’s a severe mental illness and these sickos need to be behind bars, not lurking in the corridors of our military commands!!
Posted by Syneeda at 1:27 PM

Syneeda, I read your comment on this article and I hope you are not giving up on your "Fight for Justice!!" You earned your pension so don't give it away that easy by trying to help women who can't even help themselves!! They've even allowed those dikes on Capitol Hill to emotionally rape them and seduce them with false hopes of justice. So who's worse, the men or the women when it comes to military justice?

You spent 20 of your best years working alongside those rapists scumbags, who are no different than their grandpappys who were (are) notorious for raping both men and women on the high seas, both white and black. It's in their bloodline and you can't change human nature.

Yes, the Chickens are definitely roosting.

Wow, I never looked at it like that. No wonder the elders in my community always warned and protected us from the aggression of white men. I'm Native American and African American and I felt abused in the worse way, especially after what my ancestors went through.

Yet I always wanted to learn about other cultures and my Spirit allows me to get along with anyone, and I developed a thick skin early on in my Navy career.

Being raised by a single mother, my mom never tolerated bullying in her household and she always punished my brother for bullying me. Of course he hated that and recruited his friends in the neighborhood to bully me instead. I learned to physically fight them off of me and I took self-defense classes when I served in the military.

A double WOW, as far as your comments about the "Dikes" on Capitol Hill... I never thought to correlate that... SMH... A Triple Wow...

When I was stationed in Korea there were a group of gay women who was reassigned from Fort Hood because of the "Silent" rape epidemic in the barracks. And Female on Female Rapist is never talked about. They are ALL scumbags in my book!!!

I didn't learn of the Military's Rape Epidemic until late 2011 and for the longest I thought I was the only black female officer to experience discrimination while serving in the Navy. We were few and far between.

After I started blogging, a number of victims started contacting me to share their stories. I took almost a year off from writing my manuscript to listen to their issues and to properly address Sexism and Racism in my memoir.

Until the veil is completely lifted, and ALL Races and Creeds accepts the Errors of their Ways, we will never be cleansed of the very Hate that is plaguing humanity to it's very soul.

It shames me how much this country is stuck on Vanity, Greed, Hate and Immorality that I also question, "Why do I even care." Yet I've come to the acceptance that "My God" survived me for a reason which is why I will continue to do what is right for humanity and Mother Earth. Yet I wished others felt the same.