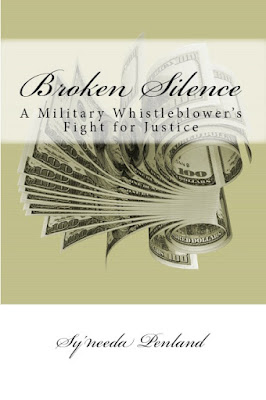 Commander Penland, I read the Judge's opinion and Congratulations on your victory!! You are truly an inspiration to all military personnel who have experienced some form of injustice at some point in their career and was afraid to speak out.

I just ordered your a copy of your Tell-All memoir and I'm looking forward to reading it. I'm sure Pentagon officials are doing damage control to cover-up their "misinterpretation" of the law???WTF???

At the very least they owe you a public apology, full back-pay and enstate your pension with a promotion. You are also entitled to a hefty compensation for the years of emotional distress you were forced to endure for the mere incompetence of those assholes.

You should contact Oprah to do a movie about your story. Just saying....

I am familiar with "Broken Silence a Military Whistleblower fight for justice".It is indeed a monumental truth that black people in the military are treated unjustly, as in the present Black Lives Matter situation. I am glad the judge applied the law in Commander Penland's situation. This case as well as all other cases of Military retaliation should be examined as Civil Rights and Human Rights violations by the Supreme Court. Military officers who commit these crimes need to be punished.

Anon(s), I'm currently working on the sequel to "Broken Silence, A Military Whistleblower's Fight for Justice," and I will be adding several new chapters to my manuscript now that Judge Rosemary Collyer has made her final ruling on my Civil Action case against Secretary of the Navy, Ray Mabus. Her decision has helped to restore my faith in our country's Federal Justice System, yet the Military's In-Justice System has a long way to go as it relates to upholding our service members Civil and Human Rights Protection! In my view, "It's too incestuous and criminal and is exactly what President Eisenhower warned us about during his farewell address; the dangers of our "Self-Governing" Military Industrialized Complex!

Just look at how many "Rapists" have gotten away with "Raping their colleagues" yet senior Pentagon officials continue to turn a blind eye to this issue and our Survivors are being forced to "Suffer in Silence" while being over-medicated by the VA and our Veteran's suicide rates are increasing by the minute!! If that's not a CLEAR EXAMPLE of HUMAN RIGHTS violation, What is?!

Until there is a LAW in this country that protects our citizens from Human Rights violations, the mere concept of "Human Rights Protection" will continue to land on deaf ears. Something to think about!!!!

Congratulations so far. I think it's still an uphill battle. The people you are dealing with like to interpret the law how they want to see it. When you show that they have "misinterpreted" the law, they re-double their efforts to retaliate and cover up. Of course, I'm not sure that there was any misinterpretation in the first place. It's not unreasonable to think that the BCNR is any different than any other bureaucracy, such as an Inspector General. Most people know that IGs, like the Navy IG and the DoD IG, are really only there to cover up for senior officials and to do their bidding when they think they have to make an example out of someone. Federal agencies scratch each other's back, trading favors and closing legitimate cases. I've heard that the DoD IG has done some house cleaning and still has not named a permanent IG. It's hard for the DoD IG to rid itself of the stench left by the likes of the corrupt Leonard C. Trahan Jr., whose framing of innocent people and falsification is a serious contradiction of what the DoD IG is supposed to represent, and is un-American.
Good luck to you.

Hi LCDR Penland. I spoke to you some years ago about your GI Bill. I am praying that you win your case and your retirement and good name are restored! I'll continue to follow your case. God speed!