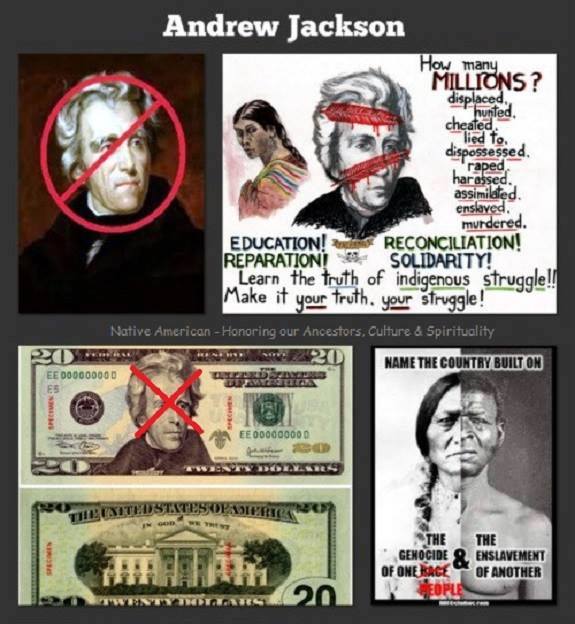 It's Presidents Day today and it's time to hand out our HALL OF SHAME award and it goes to Andrew Jackson, our 7th US President. Bloody, bloody Andrew Jackson was a very wealthy slave owner and infamous Indian killer. Jackson was given the name "Sharp Knife" by the Cherokee. His first effort at Indian fighting was waging a war against the Creeks. President Jefferson had appointed him to appropriate Creek and Cherokee lands. In his brutal military campaigns against the Indians, Andrew Jackson recommended that the troops systematically kill the Indian women and children after massacres...in order to complete the "extermination." The Creeks lost 23 million acres of land in southern Georgia and central Alabama, paving the way for cotton plantation slavery.

Jackson was not only a genocidal maniac against the Indigenous Peoples of the southwest, he was also racist against African peoples and a scofflaw who “violated nearly every standard of justice,” according to historian Bertram Wyatt-Brown. As a major general in 1818, Jackson invaded Spanish Florida chasing fugitive slaves who had escaped with the intent of returning them to their “owners,” and sparked the First Seminole War. During the conflict, Jackson captured two British men, Alexander George Arbuthnot and Robert C. Ambrister, who were living among the Seminoles. The Seminoles had resisted Jackson’s invasion of their land. One of the men had written about his support for the Seminoles’ land and treaty rights in letters found on a boat. Jackson used this “evidence” to accuse the men of “inciting” the Seminoles to “savage warfare” against the U.S. He convened a special court martial tribunal then had the men executed. He swept through Florida, crushed the Indians, executed Arbuthnot and Ambrister, violating nearly every standard of justice.

In 1830, a year after he became president, Jackson signed into law the Indian Removal Act – which legalized ethnic cleansing (example: Christian Boarding Schools), stripping Native children and toddler of their culture and identities, torture, rape and inflicting diseases on them by handing them small pox infested blankets. These children were severely beaten and punished when caught speaking their Native language. Many of these children did not survive.Within seven years 46,000 indigenous people were forcefully removed from their homelands east of the Mississippi. Their removal gave 25 million acres of land “to white settlement and to slavery. The area was home to the Cherokee, Creek, Choctaw, Chickasaw and Seminole nations. In the Trail of Tears alone, over 4,000 Cherokee people died of cold, hunger, and disease on their way to the western lands. That figure does not include the deaths of the Choctaw, Chickasaw, Creek and Seminole on their own Trail of Tears. Jackson's face appears on the $20 bill and this country celebrates with a Federal holiday for this homicidal maniac.

I was born and raised in Northeast Georgia, in a historic town where Cherokee Natives once lived and prospered. Long before the Jackson massacre or Civil War. I'm part Cherokee, African and Caucasian. The mixture is prominent on both sides of my bloodline.

After the dust settled on Jackson's "Reign of Terror," those Cherokees who "passed" (mixed with European and African alike) were able to avoid further genocide of our people (which we now know was ordered by the federal government) by learning to live and work together.

Growing up in the Northeast suburbs helped to preserve my Native Indian bloodline and temper my African Spirit. But unfortunately throughout my life, society's stereotypes, labels and mistreatment of minorities across the board, especially those of African-American descendent, kept me alienated from my true roots, most importantly my Native Cherokee culture and heritage.  I was born and raised in a majority Caucasian and African-American Community.

After spending 20 years serving in the US military, I've since returned home to my Native roots and the Spirits of our Ancestors literally speak to me. Each day of my Awakening is a new day of Enlightenment, Liberation and Acceptance.

It has been said by many Great Chiefs that the "Spirits of our Ancestors" are all around us. I've learned to embrace the teachings of their wisdom since my Spiritual Awakening and I'm finally coming into acceptance of my heritage.

I live on sacred (now burial) land where our ancestors once lived and the resonance I feel from their energy is Loving, Caring, Harmonious and most of all Forgiving!

We were and Always will Be a Loving Nation!!! #ProudToBeCherokee