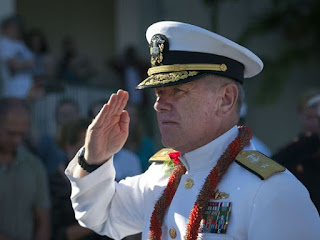 Rear Adm. Rick Williams was fired by 3rd Fleet boss Vice Adm. Nora Tyson on Friday "based on the initial findings of an ongoing investigation into the alleged misuse of government computer equipment," the Navy said in a release.

During a routine inspection, Williams was found to have looked at pornographic images on his government computer, violating Navy rules, said a Navy source familiar with the incident. The misuse of the computer did not involve any classified material and the investigation is ongoing, the source added.

"They have enough information to say it wasn't just a mistake," the source said. "It was extensive enough that they knew it was not just an error."

Williams, a career surface warfare officer, has been the head of Carrier Strike Group 15 since June. He could not be immediately reached for comment Saturday.

He earned his commission in 1984 after graduating from the Rochester Institute of Technology and served aboard two frigates and a hydrofoil as a junior officer before becoming executive officer of the destroyer O'Bannon, according to his official biography.

He first took command in 2002 of the frigate McInerney, before going on to lead Destroyer Squadron 26 and then a position as deputy 5th Fleet commander, directing maritime operations in support of operations Iraqi Freedom and Enduring Freedom.

Prior to his job at CSG 15, he was the commander of Navy Region Hawaii and Naval Surface Group Middle Pacific.

Capt. Chris Barnes will serve as a temporary replacement at CSG 15 until a permanent relief is named.

Williams is the first one-star fired since 2013, when Stennis strike group commander Rear Adm. Chuck Gaouette was ousted on deployment for misconduct including foul language, flipping off lieutenants, speculation that black admirals were chosen because of their race and sending fellow officers a racially-charged email about a black sailor.

Food for thought:  The Navy's top brass is becoming more and more embarrassing by the minute.

Yet, I'm sure this pervert will never face jail time, reduction in rank, loss of pension benefits and will likely land a cushy job as a defense consultant advisor when he retires!!
Posted by Syneeda at 11:09 PM

Syneeda, The Navy prosecuted you for far less of a crime, if what you did is even considered a crime in the "civilian world" which defines Adultery as sexual intercourse between a "married" person and someone other than his or her lawful spouse. You were single and the "married" person, Mark Wiggan, was never charged or prosecuted.

As long as senior officers keep behaving this way, the Navy can no longer defend its actions against you on the merit that you were the senior person; therefore you deserved to be punished. That justification no longer pass the common sense test.

Let's be honest for once, you were punished because you were a black women who challenged the authority of the Navy's top brass and in their eyes, all black people are beneath them. You got out of line and obviously forgot your place.