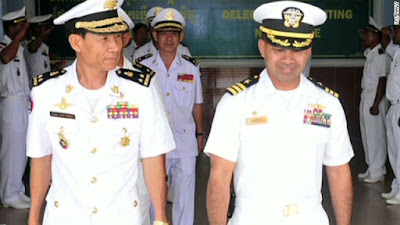 SAN DIEGO — A Navy commander accused of diverting ships to Asian ports for a Malaysian contractor offering prostitution services and other gifts pleaded guilty to bribery charges Thursday, marking the eighth conviction in the massive scandal.

Michael Misiewicz is one of the highest ranking Naval officers charged in the case, which is centered on businessman Leonard Francis, nicknamed "Fat Leonard" because of his wide girth. Misiewicz pleaded guilty to one count each of conspiracy to commit bribery and bribery of a public official at a hearing in federal court in San Diego.

He faces up to 20 years in prison if sentenced to the maximum amount for both charges.
His defense lawyers said in a statement that Misiewicz regrets his actions from 2011 to 2012. They went on to say that they plan to show at his sentencing hearing this was an "extreme departure from his otherwise distinguished and honorable 30 plus year career."

Only one defendant of the nine named in the case is still fighting the charges. Prosecutors say the investigation is ongoing and there could be more arrests.
Francis has admitted to providing an exhaustive list of gifts in exchange for classified information that helped his Singapore-based company, Glenn Defense Marine Asia Ltd., or GDMA, overbill the Navy by at least $20 million. He is awaiting sentencing.

Misiewicz accepted theater tickets, prostitution services and other items, according to the criminal complaint. He provided ship routes to Francis and then they moved ships like chess pieces, diverting them to Pacific ports with lax oversight where GDMA submitted fake tariffs and other fees, prosecutors said.

In 2010, Misiewicz caught the world's attention when he made an emotional return as a U.S. Navalcommander to his native Cambodia, where he had been rescued as a child from the violence of the Khmer Rouge and adopted by an American woman. His homecoming was widely covered by international media.

A sentencing hearing was set for April 29.

Lt. Commander Todd Malaki, who has pleaded guilty in the same case, and is scheduled to be sentenced Friday. He faces a maximum of five years in prison.

Glad to see the Navy is finally prosecuting these criminals!!

Like the saying goes, “The apple doesn't fall too far from the tree.”

When I was a budget officer in the Navy, I witnessed so much corruption that I had to write a “Tell-All” book about it.  Letting tax payers know what really goes on behind the military’s iron curtain. Yet I’m perplexed at how the public refuses to hold Congress accountable for their tax dollars.   But after watching a recent video of an IRS whistleblower, my final sentiments are, “We’ve all been hoodwinked!!”

Yet I see this particular case as a classic COVER-up… “Junior officers” taking the wrap to cover someone else’s ass!!   These good ole boys always protect themselves!!

What I learned during my tenure as a budget officer, “When junior officers see high ranking officials getting away with accepting “bribes, kickbacks, approving contracts to rehire themselves”, etc.  (which is what I uncovered during my investigation of my former bosses criminal activity) they will easily become seduced by greed and will eventually get caught up in the military’s massive web of corruption.  This is what President Eisenhower warned us about during his farewell address, “The military’s incesteral behavior with defense contractors.”  As a top military general, he’d seen both sides of the industrialized complex and had a guilty conscience on his way out the door.  God rest his soul!!

As a senior budget officer in the Navy, I was exposed to corruption across the board.  The worse scandal which is never publicized is when senior officers, serving in acquisition program management roles are given “executive authority” to approve certain particulars of their “Post Government Retirement Plan.”   This is when they are rehired by the Pentagon to serve as senior consultant advisors.

Take for instance, while the Commanding Officer is serving out his final year before retirement, he will identify a “need” for a “consultant advisor” to the command.  Of course, he (or his buddies) will be the one(s) to fill the position(s).  During the annual budget submission to the Pentagon he factors this in, thereby approving his own salary, in most cases up to $250K (annually).  This is on top of his retirement salary.

Of course this is illegal, but no one in Congress is doing or saying anything about it!!
These greedy bastards make the rules and they are allowed to break the rules because Congress allows them to!!    Yet junior officers are the ones who get punished.  SMH?!!   I’m glad I’m out of the Navy, but I think the public needs to be better informed about the military.
Posted by Syneeda at 11:21 PM

Sy, It appears there's a lot more to your story beyond the USA Today article. If I'm reading between the lines correctly, Captain Sturges approve his own contract? In your trial transcript, he stated that he was a consultant advisor to Navy Expeditionary Combat Command (NECC), as an employee of Booz Allen Hamilton. Who of course does business with Logistic Support Inc. What an interesting web of deceit. I'm going to order your book to see who else was involved in this scheme.

We see this type of "revolving door" practice in the beltway all the time and try to advise senior retiring officers to comply with the Professional Rules of Conduct when making post military employment decisions. In most cases there is a 2-year cooling off period but their experience and network of resources brings added value to the ever expanding defense industry. I'm glad you brought this to light and I will do what I can to make sure your case gets to the right ears. Stay strong and keep up the good work.

Anon, Thank you for your interest in my case but I've pretty much closed that chapter of my life. The energy is too negative for my Spirit, which was the case when I served on active duty. I'm no longer lending my energy to the military but I wanted to show my supporters that YES, junior officers do take the fall when it comes to military corruption. In 2007, the Army had a fall guy during its bribery scandal, Major John Cockerham and I lost my best friend, Major Gloria Davis, who I believe was murdered!! The entire defense industry is corrupted and President Eisenhower warned us about it during his farewell address.