Show Your Love and Support this Veterans’ Day, and Beyond… 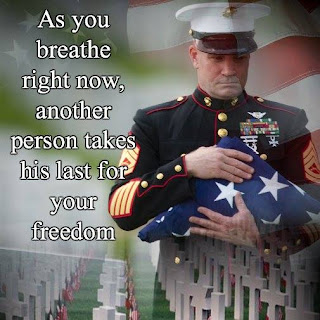 “Collateral Damage: Effects of the Current Narrative on Veterans”

During a recent Veteran's charity fundraising gala, much like the hundreds of galas that occur year round - something significant happened...

At a point in the show the emcee asked all attendees from a certain group of Veterans in the audience to stand and be recognized.... Not a single person stood in spite of their presence.

Now you may think of this as an isolated occurrence but I see it as a culmination of events that have been building for some time now.

It represents a manifesto on behalf of Veterans' that they may no longer want to be used as "props." Very few Veterans consider themselves a charity case and increasingly Veterans have come to realize that the narrative around "helping" Veterans may actually be hurting Veterans by pervading a negative perception.

You Can't Blame Veteran Charities
Veteran charities have learned that telling an emotional story gets the most donations. The more donations they get, the more Veteran families they are able to help. The challenge is balancing the message with the military and Veteran culture.

I recently looked at the messaging of 20 major Veteran nonprofits and found that only three out of 20 talked about empowering veterans to achieve their potential while 17 talked about helping Veterans in need.

This is not an act of commission but an act of ignorance on behalf of the nonprofits. They need to communicate how bad the need is and how much help is needed as part of their fundraising and advocacy. But what they are ignoring is the negative effect of this message on America's perception of Veterans.

"A Generation of PTSD and Suicide"
We all know how the World War II generation of Veterans was defined as "The Greatest Generation." However in a recent conversation with a younger post-9/11 Veteran he shared in a very poignant way what he and so many others feel.

He said, "We are defined as a generation of PTSD and suicide. We have only a small window left before that is how America will remember us."

The greatest damage to veterans occurs as these messages are pervaded through national media, social media, and the direct messaging of these organizations at their events. These messages are amplified by a very caring American public with little to no military experience.

There is another level of collateral damage and that is to the veterans themselves. This is the idea that if a Veteran hears they need help often enough, they will start to believe it.

This is the real narrative and their stories emanate from the way they act, the way they interact and the way they think. Not the way, others portray them in messages counter to their culture. We need to help change the message. Our Veterans are not china dolls; they just have different life experiences.

We must demand that Veterans' nonprofits better nuance their communications around what Veterans' are bringing to the community - Veterans as an asset and not a liability.

We should require that the nonprofits have the Veterans tell their stories more and tell their own story of their nonprofit less.

The requirement that nonprofits must always check themselves in everything they do that they are "treating people like people" and not like props or caricatures. Remove the generalizations so the audience sees not only what our Veterans are but who they are.

What Can Veterans' Do?
The single greatest thing that can be done is to provide direct feedback to these charities when you see this happening. It can be at an event or in a feedback channel through their website. Eventually they will understand and start to change how they communicate.

There is also a need to simply lead by example. Under every measure our Veterans are succeeding but the tails on these wars are long and we need to understand there will be ebbs and flows for these individuals touched by military service.

Food for thought:  I could not have written this any better!!!  YES, WE need to change the perception of Veterans.  WE are Sheroes and Heroes, not charity cases!