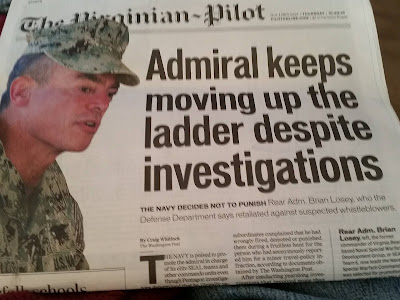 The Navy is poised to promote the admiral in charge of its elite SEAL teams and other commando units even though Pentagon investigators determined that he illegally retaliated against staff members whom he mistakenly suspected were whistleblowers.
Rear Adm. Brian Losey was investigated five times by the Defense Department's inspector general after subordinates complained that he had wrongly fired, demoted or punished them during a fruitless hunt for the person who had anonymously reported him for a minor travel-policy infraction, according to documents obtained by The Washington Post.
After conducting yearslong investigations that involved more than 100 witnesses and 300,000 pages of emails, the inspector general upheld complaints from three of the five staff members. In each of those cases, it recommended that the Navy take action against Losey for violating whistleblower-protection laws, the documents show.
The Navy, however, dismissed the findings this month and decided not to discipline Losey, a preeminent figure in the military's special operations forces. Between 2008 and 2010, Losey was commander of Naval Special Warfare Development Group - the Virginia Beach-based unit known as SEAL Team 6 that has killed terrorist targets such as Osama bin Laden. Losey now leads the Naval Special Warfare Command and has served in Afghanistan, Iraq, Panama, Bosnia, Somalia and other conflict zones.
Senior Navy leaders reviewed the inspector general's investigations but "concluded that none of the allegations rose to the level of misconduct on Admiral Losey's part," Rear Adm. Dawn Cutler, the Navy's chief spokeswoman, said in a statement. She added that "no further action is contemplated."
Full article:  http://hamptonroads.com/2015/10/navy-poised-promote-powerful-admiral-who-illegally-punished-suspected-whistleblowers#_ga=1.49424805.240957389.1445524330

Food for thought:  The way I see this is more of the same.  Be it Admirals or Generals, senior military officers behave as if they are above the law, especially if there is no “governing” body to hold them accountable.  Why sign off on military directives if NO ONE (Congress or President Obama) is willing to hold these tyrants accountable?!!

Syneeda, I totally agree!! They've been operating above the law as far back as the passage of the Feres Doctrine; whereas, Feres v. United States, 340 U.S. 135 (1950), combined three pending federal cases for a hearing in certiorari in which the Supreme Court of the United States ruled that the United States is not liable under the Federal Tort Claims Act for injuries to members of the armed forces sustained while on active duty and not on furlough and resulting from the negligence of others in the armed forces. This doctrine has yet to be overturned.