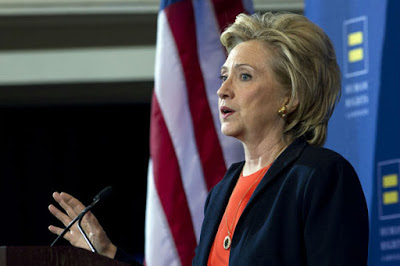 The Christian Science Monitor reports, 'The Democratic presidential candidate told a human rights group on Saturday records should be upgraded for those 'forced out of the military for being gay.'

Speaking at the annual gala of the Human Rights Campaign, America’s largest gay rights protection group, Democratic presidential candidate Hillary Clinton offered the community what some are calling her strongest show of support yet.

Among other added protections, Mrs. Clinton on Saturday said she would amend military records for lesbian, gay, and transgender veterans who have been discriminated against and dishonorably discharged.

The upgraded records belong to as many as 14,000 men and women, she said, people “who were forced out of the military for being gay.”


“They were given less than honorable discharges,” said Clinton, according to The Washington Post. “I can't think of a better way to thank those men and women for their service than by upgrading their service records.”

Food for thought:
I wonder if Hillary will fight as hard for Military Whistleblowers and victims of rape and military sexual assault who were wrongfully discharged and later denied VA benefits?!!  Like with Barack Obama, campaign promises are not always a guarantee!!
Posted by Syneeda at 11:02 PM