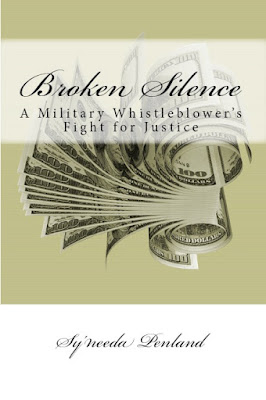 I thoroughly enjoyed reading this book authored by my dear friend Sy!  What she expressed in her memoir is nothing short of inspiration, courage, strength, and perseverance exhibited by a military Whistleblower who was targeted and experienced reprisal and retaliation.  Not only does this book depict a substantiated Whistleblower’s plight to expose corruption by senior-ranking officials in the Navy, it also shows the trials and tribulations of an African-American female who rose through the ranks to become a naval officer after beginning her career as an enlisted Sailor.  Sy experienced and witnessed discrimination and racism her entire career while serving in a male-dominated Navy, yet she stayed the course and served her country for almost 20 years.

This book is an absolute must-read!

I was fortunate to be introduced to Sy by a mutual friend.  We soon discovered we had a commonality – we both were substantiated military Whistleblowers.  Through the years, our friendship has blossomed, and we have been able to connect in ways that non-Whistleblowers may truly never fathom.

What I find astounding is the mere fact Sy was found guilty of adultery at a general court-martial, the highest court in the military that is reserved for serious felony charges.  Why are we not reading in the media about all the Navy personnel who are being convicted of adultery and sent to the brig?  Does this mean they are just merely adhering to the Navy’s Core Values of Honor, Courage, and Commitment by not committing adultery?  I think not.

Being that a majority of my background in the Navy was in the Judge Advocate General’s Corps and predominantly in a prosecutorial capacity, I never witnessed adultery being charged and prosecuted at any type of court-martial.  Occasionally, an adultery charge would be dealt with through non-judicial punishment (commonly referred to as Captain’s Mast), an administrative and non-punitive proceeding to dispose of minor offenses.  The prosecutor in Sy’s case relied heavily on photographs to convict her for adultery, yet this begs the question of where’s the proof to convict using the standard of proof beyond a reasonable doubt.  Adultery, an offense that is never criminally prosecuted in the civilian sector but is left up to divorce courts, is difficult to prosecute at a court-martial.  The element of, “That the accused wrongfully had sexual intercourse with a certain person, is substantially hard to prove.  Proof of sexual intercourse requires some legally-admissible proof beyond a reasonable doubt, such as photographs, confessions, or eye-witness testimony.  Once again, where is the proof that legally proves Sy had sexual intercourse with a married man?  The prosecution in her case was quite frankly flawed.  Her case was not about prosecuting for adultery.  Sy was an outspoken Whistleblower who had the fortitude to speak out against the contractual fraud she had witnessed.  Sy needed to be silenced, and she needed to be punished for not going along with the good ‘ole boys and their corruption in the Navy.

Sy served her country Honorably for almost 20 years, just a few months shy of her receiving a military retirement pension.  This case was about silencing a Whistleblower.  I would be willing to speculate that over half, which constitutes a majority of personnel on active duty in the Navy, have or currently are committing adultery.  We hear about cases in the media where high-ranking military officers are married and have strayed, yet they are allowed to retire, receive their military retirement pension, and are spared prosecution at a court-martial.  Why the double standard for Syneeda Penland?  This naval officer had evidence of contractual fraud that implicated high-ranking military officials.  Sy stood in the way of ensuring their future livelihoods and future high-paying careers as civilians would remain in-tact.  How could they possibly silence Syneeda as is done to other military Whistleblowers – by using the military justice system for its unintended purpose and by committing blatant retaliation.

Although Sy was sentenced to the brig for adultery and this temporarily quietened her, she will never be silenced as evidenced by her continuous advocacy for veterans, her poetry work, and her recent publicized memoir.  I have a strong hunch we will continue to hear from Syneeda Penland, a remarkable woman and trailblazer who possesses a gift of inspiration and encouragement!

Ma'am, I'm a whistleblower and would like to get in touch with you. I'm being retaliated against by senior members in my chain of command and fear that I will be brought up on charges if I continue to speak out about fraternization between officers and enlisted. I'm sure they are committing adultery because most of us at the command are unaccompanied and several staff members openly discuss the weekend "sex" parties. Even members of the legal staff are in attendance which is why I fear more retaliation.

Anon, You are welcome to contact me via my website, syneedapenland.com. Sorry to hear about your situation.