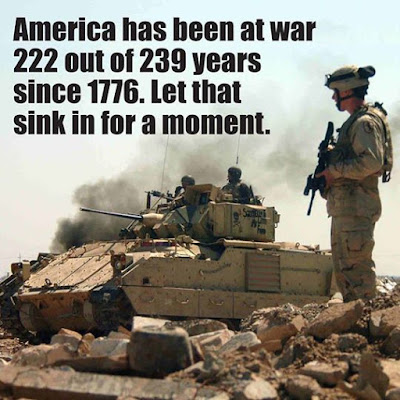 If Americans ever wonder how the top 1% "Elite" remain at the top... This is how they do it!!   For centuries, military expeditionary warfare have allowed for major  global expansion.  History has shown far enough evidence of this fact!!  Long before the European military forces first landed on the shores of the Americas, Africa, etc. Countries (Corporations) remained at war in their effort for global expansion. Since I left military service, I've had to repent my sins to GOD for choosing to be apart of the military industrialized complex.  Some may argue, that I was only 18, how could I have known that I would be a part of an organization that lies to the American public by seducing their children to bear arms against innocent civilians, in foreign countries that barely have running water or enough food to eat.  Where their young children can barely read or write and their living conditions resembles that of primitive culture and not of modern day, as we call it in America and Europe.  During my travels abroad, I witnessed this but I was not allowed (while in uniform) to speak out about it.  Yet, there are millions of veterans who will agree, but our voices remain silent.  There are also millions of veterans who are angry about being lied to and are having difficulty transitioning back into "normal" society and are not the same, and they are not being adequately compensated for their injuries (physical and mental) sustained during wartime. Yet, the top 1% "Elite" are being well compensated by the efforts of our military!! I will continue to pray for WORLD PEACE, that one day soon, GOD will teach us that GREED is not the way, only LOVE!!!