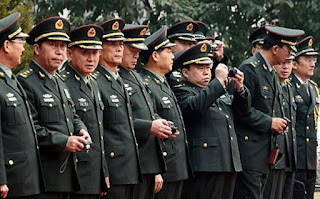 BEIJING –  China's military has referred two ranking officers to prosecutors amid a continuing crackdown on corruption in the armed forces.

Kou Tie and Liu Zhanqi were placed under investigation in November and their cases forwarded to prosecutors last month, the Defense Ministry said in a brief notice Wednesday.

Kou had been head of the provincial military command in Heilongjiang in China's northeast, while Liu had been transportation chief for the paramilitary People's Armed Police, a sprawling body with broad responsibilities for internal security, disaster relief and other duties.

Military investigations have focused on embezzlement and bribery in the housing construction and logistics divisions, where generous funding and lax supervision have created ample opportunities for corruption.

That has accompanied a new emphasis on welfare for the 2.3 million-member armed forces, with a substantial chunk of the annual double-digit percentage increases in defense spending going to salaries, benefits and other welfare for the troops.

Along with the selling of ranks and positions, the diversion of military funds into private hands is believed to have dealt a strong negative effect on morale, discipline and combat preparedness in the world's largest standing military.

The campaign against military corruption kicked off with an investigation into the People's Liberation Army's former head of logistics, Lt. Gen. Gu Junshan, who allegedly amassed a jaw-dropping fortune through embezzlement, kickbacks and the selling of favors.

Gu has yet to go to trial, while the military's former second-highest ranking general, Xu Caihou, died of cancer in March while under investigation on suspicion of taking bribes and brokering promotions.


President Xi Jinping, who is also head of the armed forces, has made the crackdown on military corruption a centerpiece of his sweeping drive against graft in the government and ruling Communist Party.