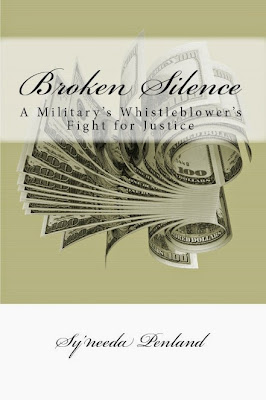 Broken Silence, "A Military Whistleblower's Fight for Justice," is a modern-day Scarlet Letter story of how former Navy Lieutenant Commander Sy'needa Penland was convicted of adultery after she blew the whistle on defense contracting fraud. Those who operate in darkness and seek to cheat and defraud the government, banded together to destroy the former Supply Corps officer's impeccable career and used her conviction as an "example" to others. Differing from Nathaniel Hawthorne's romantic fiction, Broken Silence is a true survival story of a courageous military whistleblower's fight for justice. Similar to Hester Prynne in the Scarlet Letter, Sy’ was forced to trade her gold oak leaf and stripes she proudly wore on her military uniform for a symbolic "A" of adultery. Interestingly enough, Sy' was "single." Adultery is not a crime in civilian court, but the Navy's top brass who went after the honest financial officer knew this could be a tool that would lead to her destruction. They wanted to "muzzle" her any way they could and used the military's justice system to silence her, until now.

Ma'am, an applause is definitely in order!!! Congratulations! I Salute You!! I Salute You! I Salute You! Me and members of my unit have been anxiously waiting for you to publish your book, in hopes that it will help us deal with ongoing sexism and racism in the Navy. When the Navy let you go, we lost an outstanding leader and someone who never forgot where she came from. I can't wait for you to sign my copy and get a picture with you and let my peeps know that I once served with you. Ma'am, You are about to blow up!!! God bless you and I wish you much success.

Anon, Thank you for your kind words!

Sy', I just finished reading your book, very well written! You are definitely a women of bravery, strength and courage. I can't wait to see how the Pentagon responds to this. You give a blueprint to how Sturges and his "culprits" were able to get away with fraud. No wonder they tried to silence you. BZ, Shipmate! BZ!

Anon, I've had enemies at the Pentagon for a while. When they covered up the murder of my best friend is when I knew they are capable of anything!! Regardless, they were stealing, I was punished for doing my job and I'm letting the Universe handle the rest!!