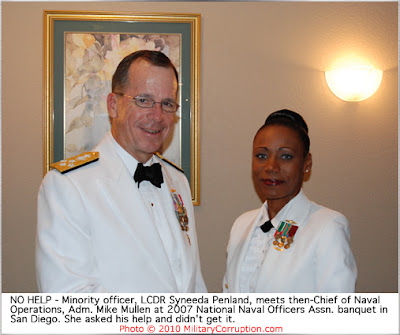 ATLANTA GA, May, 31, 2015 – Former Navy Supply Corps officer, now Advocate, Author and Indie-publisher, Sy’needa Penland, announces the release of her “tell-all” memoir, “Broken Silence, A Military Whistleblower’s Fight for Justice,” which is now available at Barnes and Noble and Amazon.com.

Some might say the number “7” is a lucky number and military veteran Sy’needa Penland will most likely agree.  As the nation winds down from the festivities of  the Memorial Day celebration, Sy’ continues to reflect on the traumatic events of her military court-martial which took place seven years ago, over the Memorial Day weekend in San Diego, California.  She bravely highlights those memories in several chapters of her heartfelt memoir.

In May 2008, former Lieutenant Commander Sy’needa Penland became the first “single” officer in Navy history to be court-martialed and sentenced to serve time in the brig for adultery.  The married husband in the alleged affair was never charged and received a Navy Commendation Medal, after rejecting the government’s immunity offer to testify against his mentor and fellow-shipmate.
About the book:  Broken Silence is a modern-day Scarlet Letter story of how former Navy Lieutenant Commander Sy'needa Penland was convicted of adultery after she blew the whistle on defense contracting fraud at the height of the U.S. Military’s war on terrorism.  Those who operate in darkness and seek to cheat and defraud the government banded together to destroy the former Supply Corps officer's impeccable career, and used her conviction as an "example" to others.

Differing from Nathaniel Hawthorne's romantic fiction, Broken Silence is a true survival story of a courageous military whistleblower's fight for justice. Similar to Hester Prynne in the Scarlet Letter, Sy’ was forced to trade her gold oak leaf and stripes she proudly wore on her military uniform for a symbolic "A" of adultery.
Adultery is not a crime in civilian court, but the Navy's top brass who went after the honest financial officer knew this could be a tool that would lead to her destruction. They wanted to "muzzle" her any way they could and used the military's justice system to silence her, until now.
(continued)

About the author:  Sy’ is a native of Buford Georgia and enlisted in the Navy after graduating high school in 1989.  Sy’ quickly rose through the ranks from a Deck Seaman to Lieutenant Commander, while earning several advanced business degrees, along with numerous specialized certifications as a Navy auditor and inspector general (IG) investigator.  She was also certified as a Command Managed Equal Opportunity (CMEO) manager and Sexual Assault Victim Intervention (SAVI) advisor.

As a prior enlisted, “Mustang” officer, Sy’ never forgot where she came from which is why she will be holding her next book signing in her home town.  More details to follow.

Sy' is a gifted poet, accomplished author and self-publisher, and is passionate about her continued service for helping others. In her spare time, she provides free advocacy support to veterans that are victims of military workplace abuse or human rights violations via the VA healthcare system.

When asked how does she feel about her ordeal, Sy’ says, “I now know why the “Caged Bird” sings!  Broken Silence has brought peace back into my life.  Its given me back my freedom, my identity and I have found my natural voice. By publishing my memoir, I wish to encourage other brave souls to speak out about military injustice, because “Injustice anywhere is a threat to justice everywhere!” ---  Dr. King

Classic military corruption!! I always knew there was much more to this story. When you consider this case and the Fat Leonard case, one have to wonder how long this has been going on in the Navy?

Anon, Greed has always existed throughout world history. In the eyes of God its considered to be one of the deadliest sins.