Posted by Syneeda at 5:21 PM No comments: 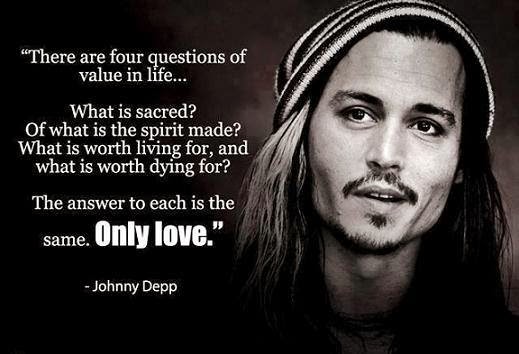 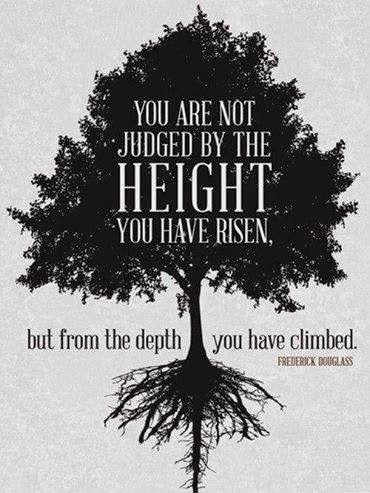 Maya Angelou Honored with Forever Stamp. The great American author, poet and activist will be honored by the U.S. Postal Service with the stamp, which will be previewed at a later date. 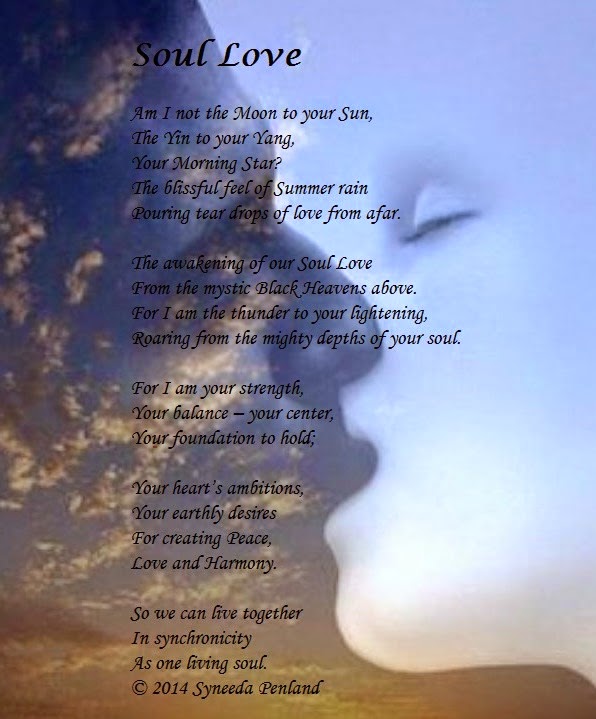 Posted by Syneeda at 4:23 PM No comments:

Celebrating Southern Women Who Made a Difference in History... 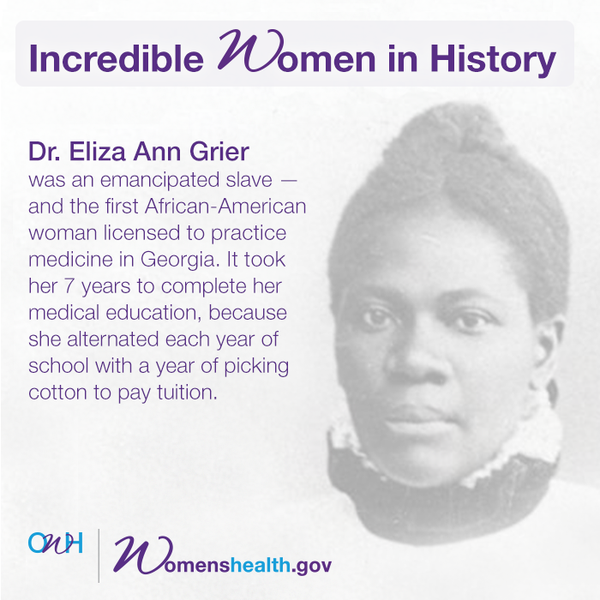 Posted by Syneeda at 9:21 AM No comments: 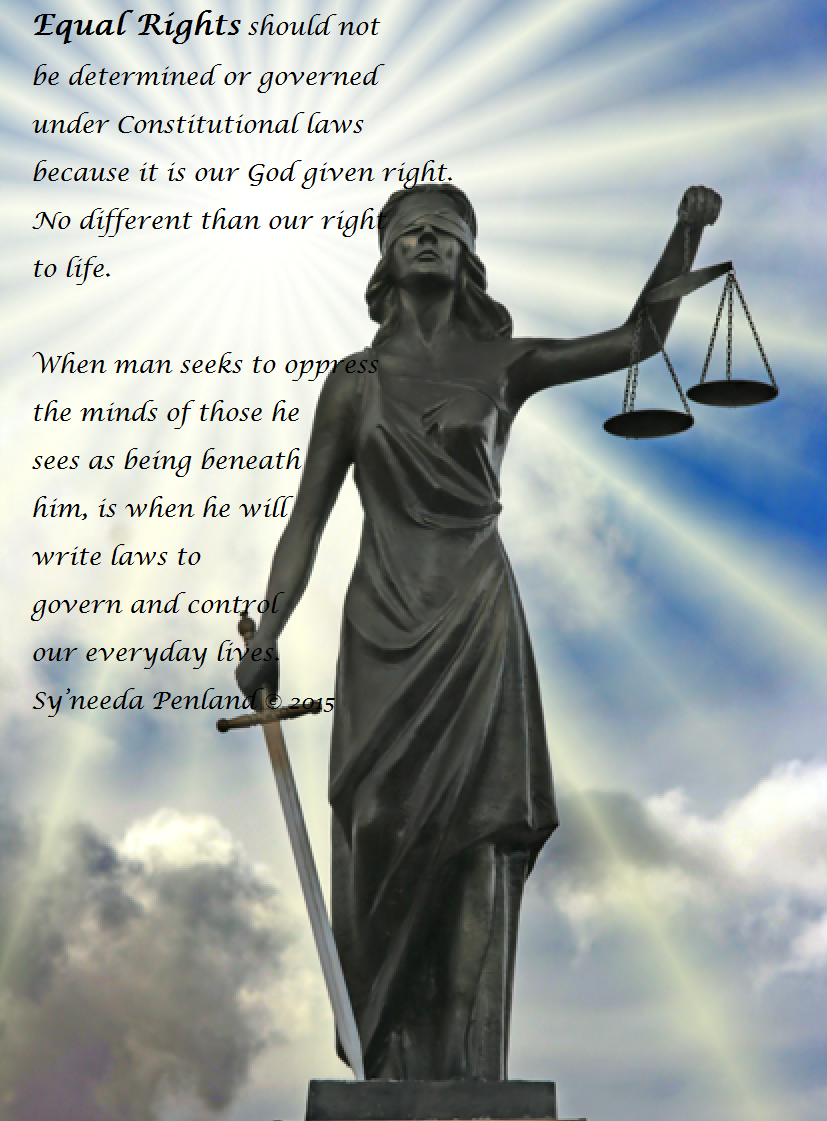 Posted by Syneeda at 6:35 PM No comments: 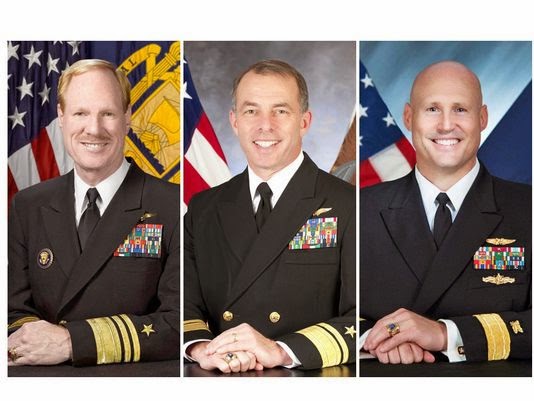 Rear admirals Mike Miller, Terry Kraft and David Pimpo were all punished for conduct during the January to July 2006 deployment of the aircraft carrier Ronald Reagan. Miller was the strike group commander, Kraft the carrier's commanding officer, and Pimpo the ship's supply officer on that cruise.

In a statement, the Navy said the three officers "were found to have improperly accepted gifts from a prohibited source, two were found to have improperly endorsed a commercial business, and one engaged in solicitation of gifts and services from a prohibited source, when they were deployed to the Seventh Fleet area of responsibility during the 2006-2007 timeframe."

Food for thought:   Another classic case of "Selective Prosecution!"
I received harsher punishment for investigating and reporting contract fraud as a military whistleblower, as well as being the only SINGLE person in military history to be unlawfully charged, prosecuted, fined, jailed and forced out of the Navy without my pension, for adultery allegations.

My civilian friends are still baffled at the notion that the military would allow senior military generals (like Petraeus) to retire with full pension, after publicly admitting to infidelity?!!  Now this… But this doesn't surprise me.  I digress…

In 2009, Major John Cockerman (an African American Army officer) was sentenced to
17 1/2 years for his involvement in the Army's Iraq bribery scandal, yet I’m sure these guys will retire with their pension benefits intact and a shot at a cushy contracting job after retirement.  In my "ghetto voice, "This is simply how they roll!"  Rank and Race certainly has its privilege in the US military!

25 years ago today, President Barack Obama was the first black student elected to preside over the Harvard Law Review 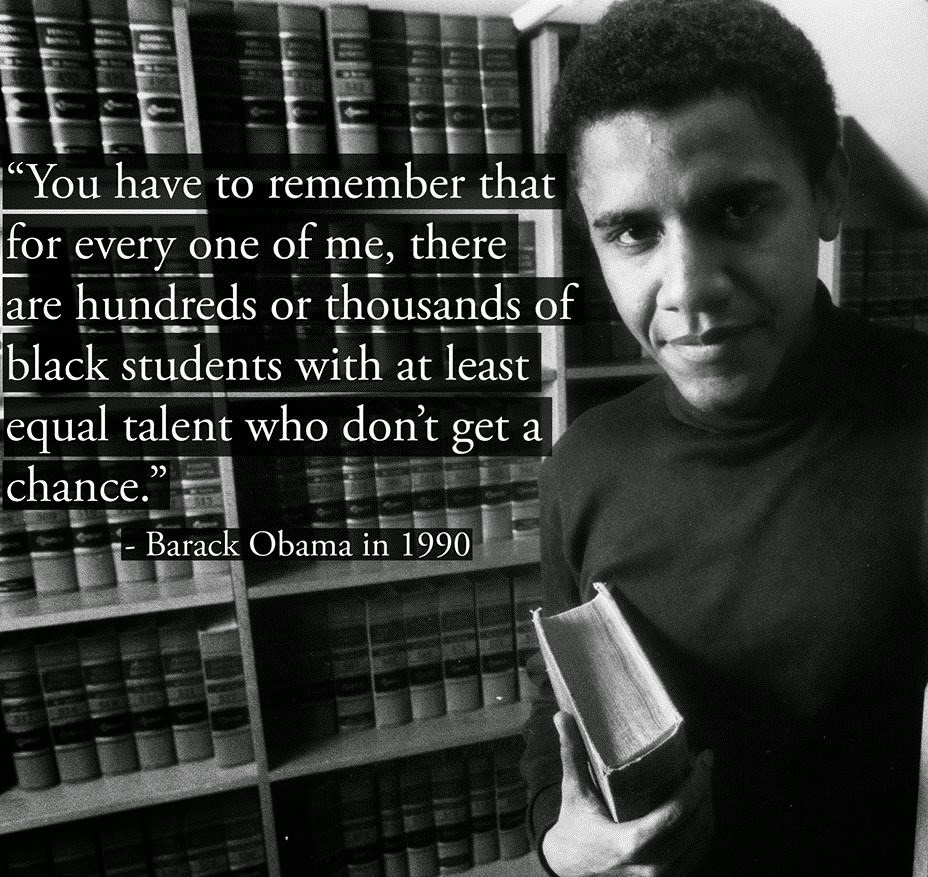 Posted by Syneeda at 3:59 PM No comments:

The Daily Beast reports, "Average Soldiers Don’t Trust Their Generals and They Have a Point"... 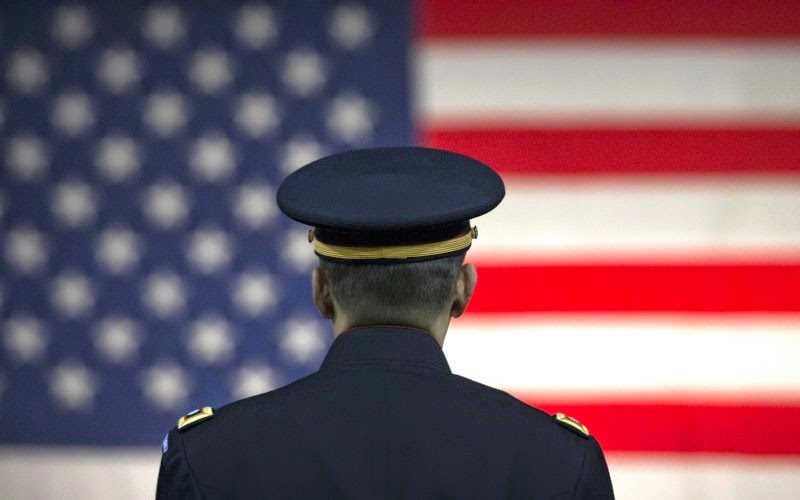 A survey last year showed only 27% of the military felt senior leaders looked out for their best interests.  To fix the morale crisis generals need to stop acting like politicians.

Through a decade-plus of war, America’s military men and women, and the families that support them, have experienced their share of hardships. Separations through multiple deployments and the inherent dangers of combat are enough to press the emotional and physical limits of even the strongest individuals.

For some of these faithful defenders of America’s interests, there have been difficulties far beyond the battlefield—difficulties not imposed by any enemy or the distance and time that separates them from their loved ones. Most ironically, the assault against them—intended or not—can sometimes come from within the military institution for which they fought, bled and sacrificed so much.

It’s no wonder why there’s concern for morale in today’s force. Just recently, outgoing Secretary of Defense Chuck Hagel said he too is worried about the decline in enthusiasm, and he believes it will take some time to reversing the mindset and perspective of the force.

There’s no single reason for the decline in morale, although some reasons are more pronounced than others. Take for instance the question about whether “senior military has my best interests at heart.” In 2009, 53 percent of respondents answered yes. By 2014, only 27 percent answered affirmatively.

One recurring complaint involves what many service personnel perceive as the excessive politicization of the military during wartime, giving rise to high profile prosecutions, excessive punitive actions and decision making that is at odds with the best interests of service personnel. So much so, instincts necessary in combat have been replaced with second-guessing and hesitation, matched by a growing sense of distrust among the ranks.

The examples are plentiful. So too are the excuses—often given in defense of ambiguous and restrictive rules of engagement—that seem to ignore the realities of war or the fact that in combat, split-second decisions must be made for the purpose of preserving lives and attaining objectives.

Food for thought:  You recruit them!  You train them!  You lead them!   But you don't betray them.  Unless you hold a top "political" post in the military?!

You would think that by now, the 1964 CRA and its amendments would've already been extended to ALL military personnel, instead of just the "privileged" class.  The abuse of authority by the military’s top brass goes beyond the cliché, “Rank has it privilege”, and is no different in the public sector.


Since joining the military in 1989, at nearly every duty assignment, I’d either bore witness too, or was on the receiving end of discrimination, sexism and/or blatant abuse of authority by senior officers towards junior personnel.  Instead of upholding a service member’s Equal Employment Opportunity Rights, Commanders would rather violate their rights, just because they know they can!!

I'm not sure why Congress chose not to hold these Generals (and Admirals) accountable for their actions, maybe out of fear?!  Who knows?!
Posted by Syneeda at 7:13 PM No comments:

ISIS Terrorists Try to Stone a Woman to Death for Adultery. Then There Was a Miraculous Intervention.

Another example of the brutality of ISIS was demonstrated by the group’s strict interpretation of Islamic law. Despite the harsh nature of the ISIS-law, a Syrian woman, sentenced by ISIS to be executed by stoning, was able to miraculously escape the ordeal.
The woman was sentenced to be stoned for committing adultery in the ISIS controlled area of northern Syria this past Friday according to the Syrian Observatory for Human Rights. The sentence was carried out by a group of gunmen in the small town Raqqa.
After the identified woman was pelted by heavy stones and thought dead by her executors, she stood up and began to walk away. When one of the jihadi attempted to capture her again, he was stopped by an Islamic jurist.

“Her sentence is done, let her go and repent to her God.” The jurist said.

Some claim that it was “God’s will” that she survived her punishment for the crime of adultery:

“An IS militant was about to open fire at her when an Islamist jurist intervened and stopped him saying it was God’s will that she did not die,” The Observatory said about the execution by stoning.

Other women have not been as fortunate. According to the Syrian Observatory for Human Rights, 15 people, 9 of which have been women, have been executed by ISIS in Syria since July for the crimes of adultery or homosexuality.
Apostasy and blasphemy are also crimes that are punishable by death according to ISIS. And because of the jihadist group’s fear-mongering and brutal interpretation of their religious laws, ISIS is able to strengthen its hold on the region.
http://www.ijreview.com/2015/02/243009-syrian-woman-miraculously-escapes-isis-stoning-execution-gods-will/?utm_source=facebook&utm_medium=promotedpost&utm_content=conservativedaily&utm_campaign=-WCA&Engagers
Feature image: The Stoning
Posted by Syneeda at 4:42 PM No comments: 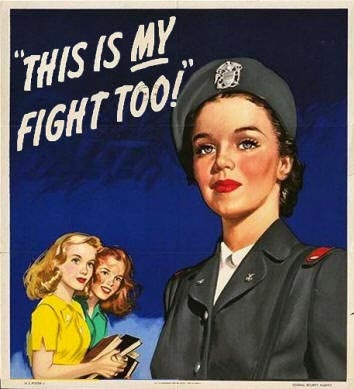 Advocates for military women are suing the Department of Defense for information about how the Naval Academy and the other military service academies recruit female students — part of a campaign, they say, to expose ongoing gender bias at the elite training grounds for the nation's officer corps.

The Naval Academy "directs no specific recruiting efforts toward women and has failed to admit women in numbers even closely equivalent to those of men," the American Civil Liberties Union and Service Women's Action Network allege in the suit, filed Tuesday morning in federal district court.

The groups argue that the limited numbers of women admitted to the Naval Academy in Annapolis, the U.S. Military Academy at West Point, N.Y., and the Air Force Academy in Colorado Springs, contribute to discrimination and sexual harassment at the institutions.

The groups filed the lawsuit after receiving what they say was an insufficient response to federal Freedom of Information Act requests in November.

In those requests, they sought detailed records about the recruitment and admission of female students, information about any quotas on female students, and how the academies handle reports of sexual assault and harassment.

Food for thought:  I spent 20 years of Naval service being subjected to sexism and racism all throughout my career.  Fighting for equality was an everyday occurrence.   One of my most challenging assignments was when I served aboard the USS STOUT and USS GONZALEZ, as the only female for an entire year.

During this time, nearly the entire wardroom was majority Naval Academy graduates and they loathed the very sight of me being there.  Especially the Combat Systems officer and his senior enlisted Chief Petty Officers.  I was constantly harassed by them.  They called me the “N-word”, “B-word” and even directed their discriminatory insults towards my African American Supply Department personnel.

Luckily, the commanding officer upheld the military’s Equal Employment Opportunities policies, and it was back to work as usual.  I didn’t have time to allow their ignorance to impede the ship’s mission!!   It was 2005, and I thought the Navy had long since recovered from the Tailhook scandal.

Throughout the pages of my memoir, “Broken Silence” (which is set to be released this Spring), I give the reader an in-depth look inside the steel walls of our Navy, from a Black female officer’s traumatic, yet triumphant experience.  I also disclose key evidence to a string of corruption leading to the Navy’s highest office in the Pentagon.  These allegations were substantiated during a DoD Inspector General investigation, and were later reported to the Dept. of Justice Anti-Trust Division, and are a matter of public record.

Because the DOJ would rather defend military criminals, vice uphold Equal and Civil Rights Protection of military whistleblowers, my case met no resolve.  But, I’m thankful to God for the experience so I can now be of assistance to help steer and navigate other aspiring female officers through the treacherous seas of our (white) male dominant Navy.

The book will be available online and at local participating book stores.
Posted by Syneeda at 3:52 PM No comments:

How can Disabled Veterans seek justice from Reprisal Acts and other unlawful actions of their former Military Commanders if they are being represented by the U.S. Justice Department?!! Here's an update of my case... I'm not too tired to go forward, I simply see no use in it!! They make the laws, "Uniformed Code of Military Justice", and their corrupted legal system is strategically designed to allow them to break them!! But to be allowed FREE legal defense by the Justice Department says enough!!!!!


You can see an electronic view of my case here: