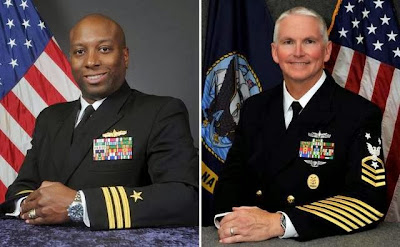 Navy Times reports -- An East Coast-based chief hazed his female shipmates by forcing them to march in formation to the end of a pier carting plastic bags of their own feces, a Navy investigation has found.

The Navy removed the executive officer and top sailor aboard the destroyer Jason Dunham on Friday after the investigation concluded they failed to examine or report the hazing of 13 female sailors. Each was forced to carry a bag of feces down the pier Oct. 15 at Naval Station Norfolk, Va., a case of collective punishment gone too far after a few sailors used inoperable toilets.

This demeaning march was observed by many, but Cmdr. Kenneth Rice and Command Master Chief (SW/AW) Stephen Vandergrifft failed to report or investigate the incident. They were fired by Capt. John Wade, the commodore of Destroyer Squadron 28, Fleet Forces Command said Friday.

Cmdr. Michael Meredith, the ship’s skipper, was not disciplined because he was unaware of the hazing until DESRON 28 started its investigation Oct. 21, explained FFC spokeswoman Lt. Cmdr. Reann Mommsen. “We’re holding the CMC and the XO accountable because, hey, they didn’t even tell [Meredith] about it. So he didn’t even know.”

Mommsen said the chief and a number of other enlisted and officers aboard the destroyer were disciplined for failing to prevent or report the hazing, but said she was unable to say how many were punished or the nature of their punishments for privacy reasons.

On Oct. 15, the ship’s sewage system was undergoing maintenance and some of the toilets were tagged out, with warnings not to use them. In two female berthings, those warnings went unheeded. A shipboard leader discovered human waste in two heads and ordered all 19 female sailors who live in the berthings to clean them out. Then 13 of them were ordered to take the loaded plastic bags to the pier.

“After cleaning the toilets they took the waste — which was solid waste, basically — and made them march in formation down the pier to dispose of it in a portable toilet at the end of the pier,” Mommsen said, adding: “The real hazing is them being marched down the pier in formation.”

The investigation found that some female sailors were ordered to clean the toilets without all the proper safety equipment, which includes rubber gloves and boots, hair coverings and face shields. But after the incident was reported, five days after the fact, the sailors were screened and got a clean bill of health, Mommsen said.

“The risk of infection is fairly low. It’s pretty much the same as if you use the restroom, you know — you have to to wash your hands,” Mommsen said. “The second thing on this — and I don’t know if this is something that you care to know or not — but as far as our vaccinations, being in the Navy, we’re vaccinated to a higher-degree than the [Centers for Disease Control and Prevention] recommends for sewage workers.”

Mommsen said the investigation’s findings were clear: The march constituted hazing and “some of the senior crew members witnessed this or knew about it and failed to prevent it or report it.”

Food for thought:  Having been on the receiving end of blatant sexual discrimination in the Navy, all throughout my 20 year Navy career, this is yet another example of SEXISM in the Navy.

When I served as the only female (senior officer) aboard a destroyer for an entire year, I was constantly reminded by the senior enlisted personnel and the XO, that women don’t belong on a warship; they belong at home, barefoot and in the kitchen.  This was in 2005, and the Navy isn’t getting any better!  I was also referred to as "a nigger, a stupid black bitch--in-charge of a department of niggers."  Although I reported their abusive behavior to the CO, no one was fired or punished for the offensive remarks or sexual harassment. I was forced to live and work in fear for another year.

It will take another decade, more females to be promoted to flag rank and “supervised” sensitivity training to rid the military of sexual and racial discrimination, or more intervention from Congress or President Obama.

BTW, the CO should have been fired.  I don’t believe for a minute that he was not aware of this incident!
Posted by Syneeda at 11:09 AM