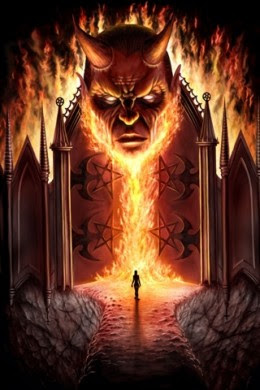 Since the beginning of recorded time
man has lived for chaos and war.
Fighting and killing his neighboring brother;
pilfering his land, raping his sister and mother.

Awakening each day
to quench the thirst of his desire;
his bleeding heart yearning
to escape the misery of his hell,
knowing that he’s a liar.

Cursed upon his birth,
forced to live in sin and pain;
no matter how hard he tries,
he can never rule the universe;
for his wicked soul will never reign.

Prowling to quench his thirst
in the gloom of the night,
forced to look upon his sins
at the early break of light.

Can a man’s heart,
filled with self-pity and pain,
ever be healed, can his soul
be saved, again?

His lost soul wonders aimlessly
in search of a different truth,
on a quest to rule over
each and everything we do.

To rule over the minds
of every man, women and child,
leaving evidence of his demonic possession
as his ferocious heart grows wild.

Can the beast in him ever be tamed?
What can cure his aching heart?
Is Love the proper antidote
to heal his bleeding heart?

To reverse his curse,
man must try to do good deeds,
If not, his will suffer and burn in hell
and his heart will always bleed.

For only God can heal man’s burning soul,
release him from his misery;
Mother God, Thou Art in Heaven
on Earth shall always be.

Pray for PEACE, LOVE and HAPPINESS
NOT War, Power and Greed!
There is POWER in Prayer!

Wow, this is such a profound piece, much different from your from your previous work. Syneeda, you are truly a gifted poet.

Anon, Thank you. I thank the world and all its chaos for my inspiration.

Interesting image you used to describe man's demonic possession, I presume? Good choice, which is what I would've chosen. To answer your question, "Can a man's soul be saved, again?" Yes, all he has to do is repent to our Higher Power, God, and God will forgive all humans for their sins.