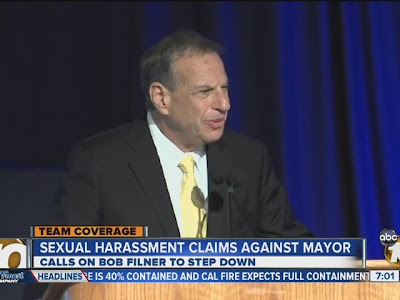 WashingtonPost reports – “The effort to recall San Diego’s embattled mayor is kicking off in the nation’s eighth-largest city Sunday, one day before Bob Filner is set to return to work after undergoing behavior therapy.

The petition drive to boot Filner from office amid sexual-harassment allegations was free to officially begin at midnight Saturday, and organizers said they expected some volunteers to start gathering signatures right away.

“This is a tremendous grassroots undertaking — truly the people taking back their government from an abuser who has betrayed San Diegans, demeaned women, and who can no longer lead our city,” said Michael Pallamary, who filed the petition to recall the Democrat. “They’re ready to tell Filner, ‘It’s over, Bob. The people are going to show you the door.’ ”

The 70-year-old former congressman has resisted numerous calls to resign from the nine-member City Council and state and federal elected officials, including House Minority Leader Nancy Pelosi (D-Calif.), who have said that Filner should step down and spare San Diego the pain and expense of a recall election.

More than a dozen women have publicly accused Filner of making inappropriate statements or advances. The latest came Thursday when a volunteer city worker who assists senior citizens said Filner repeatedly rubbed her hands, asked her on dates and made sexually suggestive comments."


Food for thought:  If the military was this aggressive in prosecuting its rapists and sexual predators, our cities would be a much safer place!
Posted by Syneeda at 11:28 PM

Men against women... Women against men... Whites against blacks... Blacks against whites; is Women's Liberation and the Civil Rights movement all over again. When are Americans going to learn how to get along?! As far as the military prosecuting rapists, that will never happen. That will be like putting a trained bulldog too sleep.