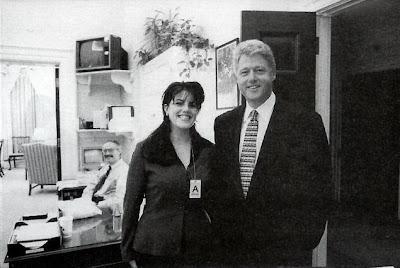 NYDailyNews.com recently reported -- "The racy recording was thought to have been destroyed many years ago. But the National Enquirer said it recently obtained a copy of the November 1997 tape, in which the infamous intern is heard trying to persuade the former president to meet with her.

Monica Lewinsky, in a never-before-heard audio tape recorded before her affair with former President Bill Clinton made headlines, attempts to seduce him by promising to take her “clothes off,” it was reported Wednesday.

In the recording, which was made after the one-time White House intern had already hooked up with Clinton numerous times — but before the scandal broke — Lewinsky was incredibly accommodating as she tried to talk the 42nd President into a quickie...."

Food for thought:  With so many sex scandals being exposed regarding sexual harassment, sexual assault, rape or infidelity; committed by former Presidents, U.S. politicians, Secret Service agents, senior military officers and thousands of other federal (military) employees, I’m surprised that I’m the only “single” person (female) that’s ever been charged, fined and sentenced to prison for adultery?!  This begs the question: Does our federal justice system(s) condone selective prosecution on the basis of sex discrimination or race?
Posted by Syneeda at 12:40 PM

I keep reading about the military's failure in stamping out sexual assaults and rape in the military. All the money being spent on training that has already been done and already failed. There was supposed to be a new attempt, but someone pointed out a letter in the Navy Times. The title was "SAPR Training falls Short." A LS2 from Virginia Beach wrote in describing the new Training as three hours long and the entire time she was completely disgusted. She describes that everything that was put out was either blaming the victims or informing potential predators and victims that if they come forward, the chances of anything happening to the predator were slim to none. I've read on your site about the person who runs the Navy SAPR, and I am amazed that this Jill Loftus person is still running such a ridiculous program that blames the victims and looks the other way when predators like William H. Weinfurtner use there position to pray on women. I'm glad these things are being discussed on your site because now I know about these useless training programs. I was also shocked to learn that the SAPR person was once with the Inspector Generals office. Now I know how it got so bad and why it will never change.