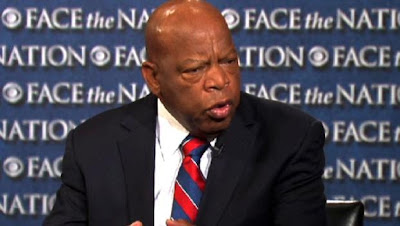 CBS News reports -- "One hundred and fifty years since the Emancipation Proclamation and fifty years after his March on Washington,  Dr. Martin Luther King, Jr., "would have said, 'My dream is in the process of becoming real,'" Rep. John Lewis, D-Ga. - who spoke on the steps of the Lincoln Memorial both in 1963 and Saturday during a commemorative rally - said Sunday on "Face the Nation."

"He'd be grateful to see an African American as president of the United States: 'It's almost unreal, unbelievable,' Dr. King would have said," according to Lewis, who has called king his "mentor." "If Dr. King could speak to us, he would say, 'We've come a distance. We've made a lot of progress. You're in the process of laying down the burden of race. But we're not there yet.'"
Lewis recalled his and King's meeting in 1963 with then-President John F. Kennedy: "A. Philip Randolph, one of the leaders during that period, spoke up and said, 'Mr. President, the masses are restless... And we're going to march on Washington.' And you can tell by the body language of the president he, sort of started moving and twisting, and he said, 'Mr. Randolph, if you bring all these people to Washington, won't there be violence and chaos and disorder? We will never get a civil rights bill through the Congress.'"
Read more:  http://www.cbsnews.com/8301-3460_162-57600004/martin-luther-king-jr.s-dream-in-the-process-of-becoming-real-rep-john-lewis-says/
Posted by Syneeda at 9:38 PM