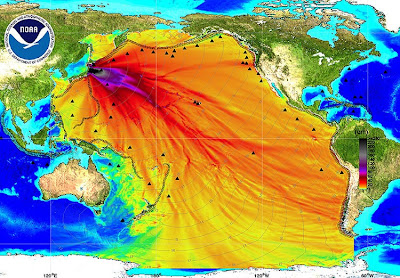 It was revealed the same day that 300 tons of tainted water is flowing to the Pacific daily from the stricken plant.

“There is no precedent in the world to create a water-shielding wall with frozen soil on such a large scale (as planned now at the Fukushima complex). To build that, I think the state has to move a step further to support its realization,” Suga told reporters.

The Ministry of Economy, Trade and Industry is considering including the costs in the fiscal 2014 budget request. If approved, it will be the first time the government has provided money to Tepco to help it contain the groundwater mixing with radioactive water in the reactor buildings.

The government has so far allocated taxpayer money for research and development related to reactor decommissioning at the Fukushima plant, which suffered three meltdowns in the aftermath of the massive earthquake and tsunami in March 2011.

A 1.4-km barrier of frozen soil will be created by sinking pipes around the buildings housing reactors 1 to 4 and then running coolant through them. According to major contractor Kajima Corp., which proposed the project, construction is expected to cost ¥30 billion to ¥40 billion.

At the end of May, a government panel adopted the project as the best way to reduce radioactive groundwater at the plant. METI Minister Toshimitsu Motegi instructed Tepco to go ahead with the project.

About 400 tons of groundwater seep into the reactor buildings every day and mix with toxic water that has been used to cool the crippled reactors.

On Wednesday, the Natural Resources and Energy Agency said about 300 tons of radioactive water per day is flowing out to the sea.

Dealing with the massive accumulation of radioactive water at the plant has remained a concern for Tepco since the nuclear crisis began.

Most recently, the utility admitted highly radioactive water is escaping into the Pacific from the plant and it is trying to prevent the spread of contamination.

Meanwhile on Wednesday, a fisheries cooperative in Iwaki, Fukushima Prefecture, decided to postpone a plan to resume test fishing from September due to the radioactive flow into the sea.

Food for thought:  Before allowing this nuclear crisis to pollute more of the Pacific Ocean, which will eventually make its way to the Atlantic Ocean and contaminate a larger portion of Marine life, the UN needs to intervene to assists Japan with this potential world-wide catastrophe.  Instead of  perpetuating wars in the middle east and other parts of the world, world leaders needs to “step up and be more responsible" in assisting a country and its people in need!