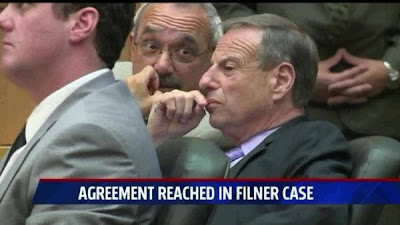 CBS News reports -- "After six weeks of heated controversy over the sexual harassment charges against him, San Diego Mayor Bob Filner has agreed to resign, CBS News' Ben Tracy confirms.
The San Diego City Council on Friday voted 7-0 to accept Filner's resignation as part of a deal his lawyers struck with the city attorney over a sexual harassment suit against him. As part of the deal, Filner will stay in office until Aug. 30."
Read full article here:  http://www.cbsnews.com/8301-250_162-57599950/bob-filner-agrees-to-resign/
Posted by Syneeda at 7:41 PM

Like so many other politicians who have gotten away with sexually harassing women for decades, Filner's resignation definitely proves his guilt. The city of San Diego should not be responsible for footing the bill for his indiscretion!

"Filner's resignation definitely proves his guilt." Really? Anonymous, do you relly think that? Do you mean that anyone who has ever resigned was guilty of something? I'm not saying he's a good guy, and he needs to leave, but what about people who resign because they can't stand working for a corrupt organization. Are they guilty? What about people who end up getting framed and have no choice but to leave someplace? What about people in the military who aren't covered? Generals and flag officers get away with many things that junior personnel are prosecuted and discharged over. Does that mean that the senior people are NOT guilty, just because they got away with something. I'm just saying that a resignation doesn't mean guilt.

Anon1, not everything is as it seems. I'm certain this scandal is the Republican's way of taking back the Mayor's seat and the DNC's way of salvaging what's left of Mayor Filner's reputation. Unfortunately the residents of San Diego is being told partial truth. Politics is a dirty and ugly game and innocent lives are always lost or tarnished in the end.