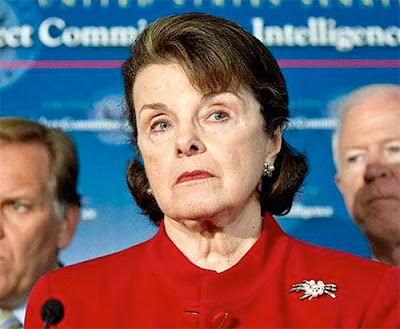 LA Times reports ---  Sen. Dianne Feinstein of California on Sunday joined a growing list of Democrats calling on San Diego Mayor Bob Filner to resign due to allegations that he has sexually harassed women, intensifying the pressure on him to step down.

“I don’t think that somebody who is lacking a moral compass really sets a role model or really will provide the kind of leadership that San Diegans want, “Feinstein, a former mayor of San Francisco, said CNN’s “State of the Union.”

Filner, a Democrat, has rejected calls to resign.  He said Friday that he was entering therapy for two weeks to learn how to behave better.

Rep. Debbie Wasserman Schultz of Florida, chairwoman of the Democratic National Committee, last week called on the 70-year-old Filner to step down, as have a number of San Diego-area Democratic officials, including Reps. Scott Peters and Susan Davis.

Filner, a member of Congress for 20 years before being elected mayor in November, has said that although his behavior toward women has been bad, he does not believe he has committed sexual harassment.

Food for thought:    Several years ago, Senator Feinstein declined to review my claims of whistle blower retaliation, sexual discrimination, sexual harassment and defense contract fraud.  Her office even returned the evidence I submitted, the 3lb box was returned un-opened.  Talk about dishonoring American taxpayers and a military veteran!   At the time, the Senator’s “moral compass” was probably in need of calibration.

At least (then) Congressman Bob Filner was generous enough to assist me with my Congressional Inquiry to his office. His hands were tied once Pentagon officials informed him that I was facing a military court martial for adultery.  In light of his current situation, I’m sure he’s remorseful for not pushing my inquiry farther.

Since he’s been under fire, there’s been dozens of military sexual trauma victims targeting him on social media sites, primarily face book. It saddens me to see these victims jump on the band wagon, without knowing all the facts of this particular case.

As a human rights advocate, I try to remain neutral and I do not support the majority consensus that ONE man should pay for the sexual crimes and misdeeds of all men.  Yet I’m proud to see my fellow sisters (and brothers) finally taking a stand against the sex crimes committed by unprosecuted sex offenders.
As a victim of due process of law, I say we should “silence the alarms” and allow the Mayor and his victims to have their day in court.  If he is found guilty, I’m sure he will continue to do the honorable thing.  Until then, we should focus our energies in praying for President Obama to amend the Civil Rights Act; to guarantee protection of our human rights in the workplace, in our communities, in our schools, etc. It’s time our politicians consider preserving our human rights, not violating them.
Posted by Syneeda at 6:29 PM

Interesting! I've heard the same thing about Senator Feinstein. For whatever reason, she doesn't seem too interested in helping the little people, but always wants to get face time by claiming that others should do the right thing. If your package was returned unopened, I think that shows a tremendous disregard for her constituents and her part in playing politics. If you ask me, she could have had a lot of face time helping you and exposing the corruption. The question is whether it was her staff or the senator herself who refused to help you.

Anon, Thanks for the comment. You make a valid point, she could've made great strides in her support to crack down on wasted spending within the defense department. It's sad when our elected politicians, or their staff members ignore claims of fraud against taxpayers. Their efforts, to take on whistle blower's complaints of fraud, could've easily prevented the budget sequester. With all the "inside trading" going on in the world of politics, I'm sure she had an agenda. California has a lot of money coming into the state, a significant portion from the defense budget and defense contracts. "Why rock the boat?" But its sad that she's not supporting one of her own party members. Like I said, I believe in equal and fair justice but to immediately put Filner under the bus, to deflect from the Republican Party's "War on Women" is a low blow.