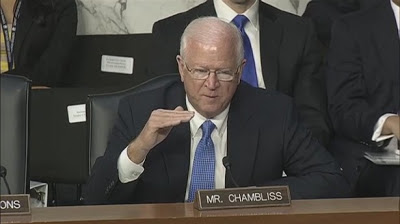 The Rawstory.com reports -- "Sen. Saxby Chambliss (R-GA) on Tuesday suggested that the “hormone level created by nature” was to blame for rapes in the military and that all pregnant servicewomen should be investigated to make sure their condition was the result of consensual sex.  At a Senate Armed Services Committee hearing on sexual assaults within the military, Chambliss opined that the Pentagon’s decision to allow women is combat roles was only going to make the problem worse.

The Georgia Republican recalled that “several years ago when we had the first females go on an aircraft carrier, when they returned to port, a significant percentage of those females were pregnant.”

“Was any investigation made by the Navy following that incident to determine whether or not all those pregnancies occurred as a result of consensual acts?”  he asked Chief of Naval Operations Admiral Jonathan Greenert.

The admiral replied he did not have details of the incident immediately available, but he pledged to follow up.

Chambliss noted that Democratic proposals to modify the Uniform Code of Military Justice (UCMJ) and take sexual assault reporting outside of the victim’s chain of command might not work because young servicemen were being driven by their “nature.”  “The young folks coming in to each of your services anywhere from 17 to 22 or 23,” he pointed out.  “Gee-whiz, the hormone level created by nature sets in place the possibility for these types of things to occur.  So, we got to be very careful on our side.”

Food for thought:  Why does it not surprise me that Admiral Greenert wasn’t prepared to answer the Senator’s question?!

Senator Chambliss was on point to identify that “the hormone levels” may have played a significant role in the military sexual assault and rape cases.  In my view, the Senate also needs to consider the combination of that, along with the intense physical and mental training that is inflicted upon our young men and women immediately upon entering the military.  It’s a recipe for disaster.

To overlook this issue is no different than ignoring the fact that each time a co-ed ship leaves for an extended deployment, the likelihood of females getting pregnant will increase by 50%.  What do you expect in a cohabited working environment?!

You can also consider “the increased hormone levels” in those females who have become so aggressive that they are willing to fight and die on the front line.  What is that all about?!

Whether you want to blame it on the hormones that is naturally produced in our bodies or injected into our foods, nature or the gruesome military training and working environments; the military’s justice system is long overdue for a complete overhauled.

With years of ongoing war, our young men and women have been pushed far beyond the norm.  If their hormones levels are already spiked before they enlist in the service, the military is simply offering them a much larger playground to exert their sexual energies.

I was young once and I enlisted in the military at 18, trust me, I know what these young veterans are experiencing.  Unfortunately, the older members of the military’s top brass have let their internal problems escalate out of control!
Posted by Syneeda at 7:24 PM

Wow, those military officers sure are OLD! The military is so outdated, they need to get with the times. With all the advanced technology our country already have in place, tax payers are wasting their money paying the salaries of these fools who can't teach our young men who to keep their penis in their pants!

Anon, I believe you meant to say, "how" to keep their penis in their pants? Regardless, I'm disappointed to see what's become of our military since the 9/11 war. Despite the circumstances leading to my unlawful discharge, I once believed in our military and what it stood for. Today it's become exactly what President Eisenhower had warned us about. Their focus is more about war and money vice protecting the lives of our veterans. As a former officer and now private citizen, I'm not sure if I trust our military anymore. Sadly, there are thousands of other veterans who feel the same way!

I'm sure there are dozens of reasons why Adm Greenert evaded the Senator's question, telling by his egotistical grin. He's yet to prove that he is fully competent to be the top chief in the Navy. When the Navy first started integrating women at sea, it was also dealing with issues of homosexuality on board its submarines, which I'm sure Admiral Greenert knows a great deal about. That's certainly a top he'd rather avoid. Rape and sexual assault in the military is not just occurring against women. Since the 9/11 war, statics have shown that military predators have also preyed upon just as many young men than women. After females started to speak out and make reports to their chain of command, the predators began to attack vulnerable young men. Its unfortunate that this cancer has already been released back out into the general public. There maybe thousands of rapists that's already been discharged from active duty. These men have also been exposed to excessive amounts nuclear chemicals that can be passed on to their victims. I'm sure the Senate Armed Services Committee would rather keep this information from the public. Are they more concerned with "greed, power and control", rather than the welfare and safety of American citizens?