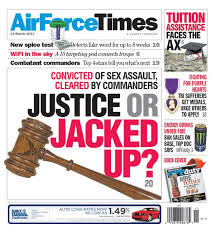 USAtoday reports-- "A female soldier is groped inside a barracks, another in a base supply room, a third on a shooting range.

A sailor is molested by her defensive-tactics instructor; a female Marine lance corporal is raped by a gunnery sergeant who's also a recruiter.

Two male soldiers, in separate hazing incidents, are wrestled to the ground by fellow GIs and sodomized with a broom handle or plastic bottle.

The cases last year are among thousands detailed in a searing 1,500-page Pentagon report on pervasive sexual abuse in the U.S. military released last week. It estimates a rate of about 500 men and women assaulted each week of 2012.

The scandal is unfolding rapidly in an embarrassingly public manner, each new chapter confirming the report's finding that the abusive culture is endemic. Tuesday night, the Army revealed that Sgt. 1st Class Gregory McQueen, who was responsible for sexual assault prevention at Fort Hood, Texas, is under investigation for allegedly forcing another soldier into prostitution and assaulting two others.

The pace of the assaults outlined in the Pentagon report — three an hour in 2012 — constitute a crisis of command that Defense Secretary Chuck Hagel says could undermine the very effectiveness of this country's voluntary military.

Yet despite a greater awareness among the Pentagon's brass, as well as mandatory annual training to snuff out sexual abuse and usher in an era of openness in the military, the problem has only gotten worse.

USA TODAY interviewed lawmakers, social scientists and people who have worked on the sexual assault issue inside the military to determine why the Pentagon hasn't been able to stem this predatory tide. All pointed to two factors — one a new plague, the other as old as the military itself — standing in the way:

• A military culture more coarse toward women in the ranks, the result of stress from a decade of war and the status of women as second-class warriors barred from combat roles. Male recruits are drawn from a society where violence and objectification of women are staple elements of films and video games.

• A military justice system with origins dating to the Revolutionary War that gives commanders of accused troops ultimate power over legal proceedings.

A starting point, experts say, might be the culture producing our soldiers"...

Food for thought:  I couldn’t be more proud of our veterans who had the bravery and courage to speak out against the injustices within the iron walls of our military.  How can our country be considered a “World Leader”, if we are grooming a bunch of rapists, thugs and thieves?  The Department of Defense needs to do better background checks on our young recruits, clean house from “top down” and completely revamp the military’s “Uniformed Code of “Injustice!”
Posted by Syneeda at 10:21 PM

What is becoming of our military. I just read an article on militarycorruption.com about some soldier killing other soldiers and got sentenced to life in prison. So when a soldier kills another soldier, he goes to jail, but when he rapes and sexually assault our young men and women he get a "High Five" and no jail time. Isn't this what happened in your case LCDR Penland, you spoke out about injustices and you got punished. Frankly, as a tax paying citizen and fellow veteran, consensual sex or paid sex, was always a perk of being in the military. Especially when you are stationed overseas. "Out of sight, out of mind". But they took your case way too far. I guess Sturges and his Boy, Ike Owens was trying to prove to you that they had the balls and not you. But when they have top cover from the Pentagon, they have plenty of disposable balls to go around. Take a look under Jill Loftus's skirt, I'm sure hers are hanging pretty low!

Wow, I'm hearing more and more about this Jill Loftus person and what a waste she has been, living off the tax payers, and doing nothing but trying to train herself out of the situation that she helped create. Sexual predators in the military got there because they learned that the IGs would cover-up bad news and when it did come to light, all that would be required if they got caught is more training. Jill Loftus covered up and lied when she was the Deputy Navy IG and now all she does in another high-paid position is try to train her way out, blame the victims, and claim that she is discouraged. Hey Jill, you caused the problem when you didn't do anything but cover up, and now you're still living off the tax payer while rapes and assaults sky-rocket, claiming that you are discouraged. Wake up and join the reality that most people live with. Understand that you are the problem. You allowed things to get worse when you covered for your friends in high place. Do everyone a favor and make room for someone who actually wants to do a job.

OMG! I can't believe it. Jill Vines Loftus...what a piece of work. She's at it again! Someone shared an article with me from the Navy Times. Jill is in a state of complete denial. Rather than recognize that there is a problem, she's still playing numbers tricks. Now she's claiming that the 33% increase in assault and rape incidents doesn't reflect "recent efforts by leadership to reduce sexual assault incidents." She still thinks that she can train her way out of her failure.
Here's another failure: She's "working" to put a SAPR-C program in place for civilians. It's a 30 minute video that is supposed to include what resources the Navy provides for civilians if they've been sexually assaulted. What a joke, Jill. You sat back while William H. Weinfurtner was trolling the federal workplace soliciting sex from unsuspecting women, and you condoned it and covered it up. You should have received all the reports when you were the IG, heard about the recorded solicitations and done something. But no, you covered it up, did nothing, and allowed the corrupt activity to waste the tax payer's money to cover it up. Of course, that was in the San Diego area where Willian H. Weinfurtner wanted to play hide the sausage on the tax payer's dime. You want to mitigate the problem in San Diego with "roving chiefs" and "junior officers" dispacthed to monitor barracks and bowling alleys. Get a grip Jill, you're targeting junior personnel and you're oblivious to high ranking officers, like Lieutenant Colonel SAPROs, who are setting the example that the juniors follow. You need to set the example for the junior people by showing that the military takes action against the senior people. Until you stop covering for the seniors, you'll never fix the problem.

OK, Jill, if the 33% increase over the prior year doesn't reflect your "recent" efforts by so-called "Leadership," what exactly have you been doing since you jumped-ship from your failure with the Inspector General? You've been the SAPRO for years and your current excuse is that the increase doesn't include "recent" training efforts. What excuse will you come up with next?