Why the Hunt for Assata Shakur Matters 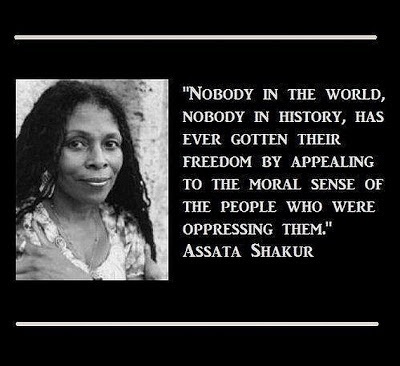 The huffingtonpost.com reported --"The FBI's recent announcement that it has placed former Black Panther and escaped prisoner Assata Shakur at the top of its Most Wanted list and the doubling of the reward for her capture by the State of New Jersey is a development that progressives should not ignore. This newly intensified effort to put Shakur back in prison matters for a number of reasons.
First, by elevating this 40-year-old case to top priority, Obama's Justice Department is actively memorializing the struggle for black freedom of that era, but in a way that offers us a criminalized, even militarized interpretation of it. How we understand the past has bearing on our political present, and making Shakur, a symbol of black militancy of the 1960s and '70s, into a high-level national security threat serves to criminalize the greatest movement for democracy in the 20th century.
What's more, fashioning this morality tale erases the central role of the FBI's COINTELPRO in her controversial case, a willed forgetting of the well-documented framings, murders, and false imprisonments aimed at the black liberation movement and others of that era, as opposed to a clear-eyed assessment of the disputed facts on the ground.
Second, the legal and rhetorical framework of terrorism being used in this case strengthens the U.S. state's ongoing and intensifying campaign to threaten, harass and detain not only Muslims and Arabs, but antiwar, and green activists. Shakur was given the designation of "domestic terrorist" under the Patriot Act in 2005, and a glance at mainstream news stories on the Shakur case right now shows the casual interchangeability of the terms "militant" and "terrorist," turning the domestic racial conflicts into an open war by the United States against oppressed groups inside its borders.
The authority of federal agencies to wield military power against U.S. citizens, which has become more common under the Obama Administration already, is deepened by turning Shakur into a symbol of demonic power. Such militarization also reflects the full realization of a carceral state that has enormously expanded in the last two decades, imprisoning more people than any country in the world, both per capita and in absolute numbers, with vast over-representation by black and brown people...
Read full article here:  http://www.huffingtonpost.com/joseph-lowndes/hunt-for-assata-shakur-matters_b_3211657.html
Posted by Syneeda at 2:41 PM