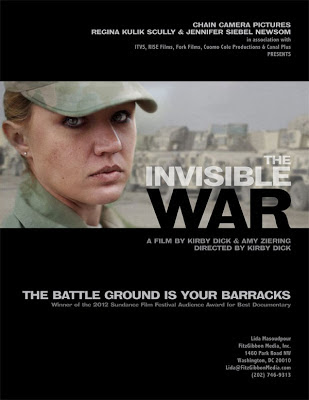 My journey to end sexual assault in the military began with the film, THE INVISIBLE WAR. Starting out, I had no idea what was in store for me. No idea that the film would sweep the nation, that hundreds of thousands of people would have my back, stand up and take action in support of our cause. I couldn't have imagined that we would be able to influence policymakers or reach the Commander-In-Chief's desk.

I just knew that if telling my story helped prevent even one man or woman from having to experience what I did, then it was worth sharing. Because every person hearing about the epidemic of military rape is one more step to making sure this problem is no longer invisible.

We're getting there. It's working. Today with your support, military rape is not invisible. Tonight, THE INVISIBLE WAR begins airing on PBS. Having my story -- and those of countless other brave survivors -- broadcast on public access television across America couldn't come at a more critical time.

Will you tune in? Find out when THE INVISIBLE WAR airs near you.

Last week the the Department of Defense released the Sexual Assault Prevention and Response Office (SAPRO) annual report, and it showed a significant spike in assaults -- an increase of 35% over the last year. Over 26,000 service members were sexually assaulted in 2012 alone.

The report hasn't gone unnoticed. Congress is speaking out and just last week the White House hosted a meeting of bipartisan legislators working towards a solution to this egregious problem.  But our work isn't done yet.

Get the details on when THE INVISIBLE WAR airs in dacula and set your DVR, mark your calendar, stick it to the fridge: just be sure to tune in to PBS and share why this fight means so much to you. Share the experience: watch with friends and family to help us keep spreading our message.

And for those of you who are, or know, a survivor of military sexual assault ready to tell your story, please let me know. Simply reply to this email. I'll send you a follow-up email with some ideas for how you can get more involved.

Trina, the Navy is taking "credit" for a 32% increase, but the Navy's SAPRO claims that it is all due to more people coming forward, and not an actual increase in sexual assaults or rape. Of course, we've all been hearing about the Navy SAPRO, Jill Loftus, who had the power as the Deputy Navy IG to do something when the Navy was covering up, but didn't. Now she makes excuses for the perpetrators, claiming that the victims are somehow at fault and only wanting to provide more training to commands that "encourage" a command climate that looks the other way when assaults take place. I often wonder why I've never heard her talk about actually taking action against the offenders. What do you think about a SAPRO that doesn't seem to want to do anything?

Anon,
In my view, Jill is simply following and upholding a certain "Code" of unethical behavior, which is to allow the military's top brass and their high level appointed subordinates to deny, yet abuse the Constitutional rights of its lower level workforce. In the process, they are failing to uphold the principles that are governed under the 1965 Equal Employment Opportunity Act. To be effective with creating a positive change in both our society and in the military, we must retrace our steps in history to see where the problem first went wrong. We are living in not only a New Age of technology but of a race of people who seek to work and earn a descent way of living, not to be abused, harassed, sexually assaulted or raped on the job. I don't get it... Why do civilians get more protection under this law and not our military veterans?!

Another SAPRO being investigated:
A sergeant first class in charge of sexual assault prevention at Fort Hood is under investigation for sexual assault, the Pentagon announced Tuesday night.
The soldier, whose name has not been released, is being investigated for abusive sexual contact, pandering, assault and maltreatment of subordinates. The soldier has been relieved of his duties at the Texas post, and no charges have yet been filed, the Pentagon said. He oversaw the program at the battalion level, a unit of about 800 soldiers.

The soldier is being investigated for, among other things, forcing a subordinate into prostitution and sexually assaulting two others, according to a Capitol Hill staffer who was briefed on the case and spoke about it on condition of anonymity.

Two senior Pentagon officials, who spoke on condition of anonymity because the case is under investigation, also confirmed that the sergeant is being investigated for running a prostitution ring.

What's wrong with this picture?

Senator McCaskill gets what the military has tried ever-so valiantly to ignore:
“Instead of focusing on prosecution, there has been an effort to ‘train’ their way out of this problem with programs discussing unwanted sexual contact or encouraging a buddy system for women on bases,” McCaskill wrote an in email to her campaign mailing list. “It’s not going to work. This isn’t a problem the military can ‘train’ its way out of.”
Good on you, Senator! Jill Loftus should get a clue or get out. You can't blame the victim and spend more money on training thinking that it will fix a problem that can't be fixed if there is almost NEVER a penalty for the crime or if you have someone like Jill Loftus who is going to cover-up for the good ol' boys club. Just can't believe our taxes are going to pay for a senior executive like Jill who dosn't get it and refuses to do anything.